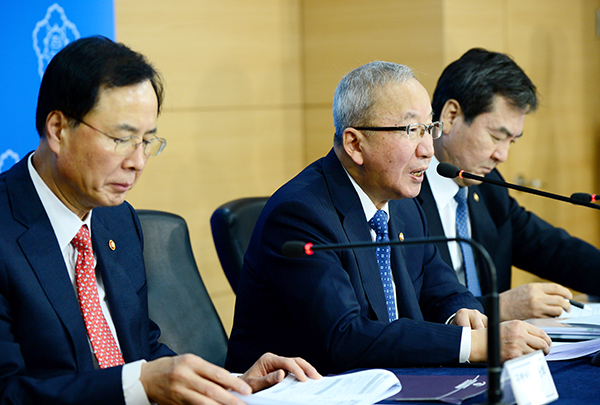 As part of the president’s three-year economic plan, the government yesterday announced it would boost the merger and acquisition (M&A) market by easing regulations on local private equity funds (PEFs).

The Ministry of Strategy and Finance, Financial Services Commission and Fair Trade Commission came up with a plan to encourage more large businesses and PEFs to participate in M&A deals by removing restrictions, providing tax incentives for companies that acquire start-ups and improving procedures.

“To make the economy more dynamic and innovative, boosting M&As can be a solution,” said Hyun Oh-seok, finance minister and deputy prime minister for the economy, at a press conference yesterday in Gwanghwamun, central Seoul.

In Korea, the number of PEFs that specialize in M&As is small compared to other countries because they are constrained by a number of strict regulations, the Finance Ministry said.

According to ministry data, PEFs accounted for a mere 0.47 percent of GDP in 2012, compared to 0.72 percent in the United States and 1.22 percent in Great Britain. A total of 45 PEFs were established in the country last year, down from 60 in 2012, according to the Financial Supervisory Service.

Unlike foreign PEFs that have no restrictions in the Korean market, local PEFs face numerous rules and regulations, the ministry said. Local PEFs are not able to make additional investments after their total asset reach 5 trillion won ($4.7 billion), since they have conglomerate status that limits management decision-making. They can acquire stakes in third-party companies but are not allowed to buy business units, although there is demand.

The government will allow those PEFs to acquire not only stakes but also businesses.

Strategic investors will also be able to take part in major M&A deals.

In the struggling shipping market, crude oil, materials, liquefied gas and coal companies can acquire shipping companies that are undergoing restructuring. Such acquisitions have so far been limited by law.

Under the nation’s fair trade law, when PEFs reach 5 trillion won in assets, they are restricted from making mutual investments in their subsidiaries or affiliates. This restriction will be eliminated.

When conglomerates acquire start-ups, the acquired companies should operate independently for three years before being included as subsidiaries of the groups. The government is considering an extension of that period.

To help PEFs easily withdraw their investment after acquisition, companies whose largest shareholder is a PEF can go public on the stock market.

Until recently, no company whose biggest shareholder was a PEF could be listed on the stock market in order to protect investors.

In most M&A deals, cash is used, making it more difficult for businesses that lack liquidity to participate in transactions and creating a major obstacle to the growth of the market, the ministry said.

From now on, when companies agree to exchange stock rather than cash in an M&A contract, the tax on capital gains will be postponed.

When acquiring start-ups designated as “innobiz” under the small business technology innovation promotion law, buyers will get a 10 percent discount on corporate income taxes. A restriction on setting stock prices at plus or minus 10 percent after acquisitions is also considered a hindrance and will be lifted.

Finally, in three years the government will create a 1 trillion won fund for M&As of small businesses.

“A measure with the biggest impact will be loosening the regulation on decision-making of PEFs over 5 trillion won,” said Chung Eun-bo, deputy finance minister. “There will be no risks of adverse M&As in this case, because at this moment, there are many companies that would be considering acquisitions, if not for those regulations.”