New libraries that leap right off the page

New libraries that leap right off the page 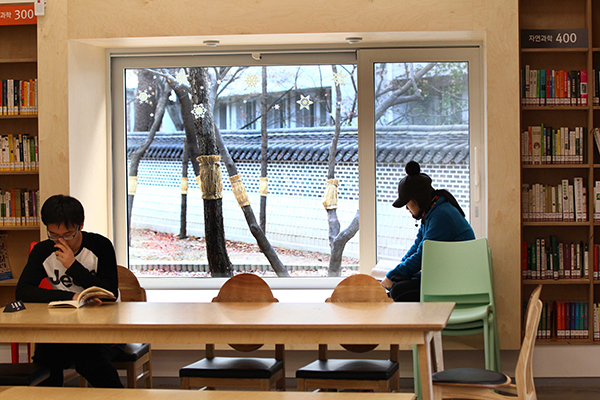 Readers at Samcheong Forest Library, which was formerly a store in Samcheong Park. It was transformed into a small library as part of Jongno District Office’s “Lovely Library” project. By Oh Jong-tack

Things have not been looking good for books for a while. Paperback books, once ubiquitous, have become replaced by digital gadgets, and visits to local libraries have given way to movies, Internet cafes and other noisy diversions.

But for fans of the written word, all is not lost. Several extraordinary libraries have recently opened across Seoul. These new libraries are not the huge, dreary boxes of the past, but instead are being reborn in a variety of sizes, designs and specialties.

The Korea JoongAng Daily explored some of these new libraries, examining a few of the most interesting buildings with the most intriguing collections that have opened over the past year in Seoul.

In order to increase access to libraries in the old neighborhoods in the center of the city, Jongno District launched a program called “Lovely Library in Jongno” in 2011. Fourteen libraries have been opened around the district, most of them small-scale centers. But the two most recently opened libraries are perhaps the most interesting.

The 13th library is named Samcheong Forest Library, and it is located in a renovated old snack shop in Samcheong Park, giving it a more nature-friendly locale. In addition to holding 5,000 books, the venue has a playground and various ecological programs where children can learn about soil, insects and plants.

Dodam Dodam Hanok Children’s Library is the 14th Lovely Library branch (pictured above). It occupies a hanok, or traditional Korean home, in Sungin-dong on the eastern side of Jongno. Dodam dodam is a Korean phrase for “children growing up without much trouble.”

Matching its hanok setting, 20 percent of the library’s 2,889 children’s books are related to Korean traditional culture. In addition, the library runs educational programs for children that teach them Chinese characters and calligraphy. 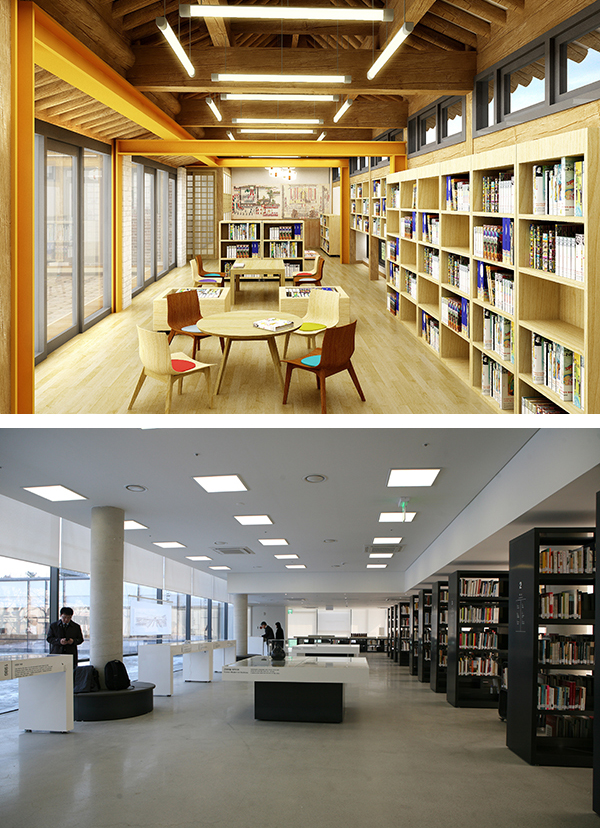 2. The Digital Library of the National Museum of Modern and Contemporary Art, Seoul

Despite being called the “digital library” of the National Museum of Modern and Contemporary Art (MMCA), there is plenty of analog books and information here, too. The two-story library, located at MMCA’s Seoul branch, has a comprehensive collection of books, magazines and digital archives that visitors can explore without paying an admission fee.

The collections of books on the second floor include sculptures, installation art, calligraphy, architecture, media art and biennales, some of which were donated by the artists. In the small displays, there are also materials relating to Korea’s top modern artists, with their initial drawings, notes and photographs.

The digital archive is on the third floor, where people can watch digital resources such as videos, artist interviews and documentaries about the making of the exhibitions. There is also a special reading room where people can go through the archives of 100 Korean contemporary artists.

The interior of the library is equipped with simple but comfortable furniture created by Ha Ji-hoon, an award-winning furniture designer, which adds a modern and slick vibe to the setting.

Located amid a cluster of hanok just west of Gyeongbok Palace in the central Seoul neighborhood of Seochon is a smaller, compact library dedicated to photography that just opened on Jan. 20.

Connected to Ryu Ga-heon Gallery, this library is one of the very few spaces in Korea that exclusively deals with photography-related books.

“The space was originally a part of the office next to the Ryu Ga-heon Gallery,” said Park Mi-kyung, the gallery manager. “But in order to celebrate the gallery’s fourth anniversary, we wanted to deepen the meaning of the venue, which is why we decided to make a library out of it.”

Occupying just 112 square meters, or 1,200 square feet, in an elegantly restored hanok, the library holds about 1,000 photography books, with some shelves solely devoted to Korean photographers. Park said that a lot of the books on photography are hard to get a hold of because they either go out of print quickly or, even if they are available, they can be too expensive for most people to buy. With the help of donations from photographers and publishers, the Ryu Ga-heon Library was able to collect some of the rarest and most prestigious books on photography.

However, this library is quite exclusive, accepting only 100 members a year, all of whom have to pay a pricey membership fee. For nonmembers, the library is open only on the last Saturday of each month.

In addition to housing books, the library holds six small gatherings next door each year, where the members get to meet with famous photographers and share ideas on art, culture and photography.

“It’s like meeting a living text,” said Park. “People are able to learn where artists get their inspiration and how that melted into their photographs.” 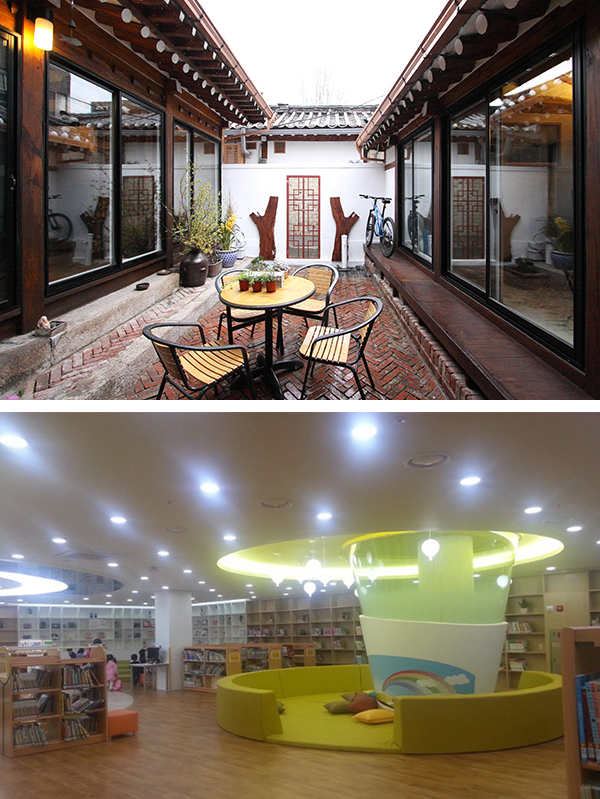 Located in Songpa District in southeast Seoul, Geulmaru, a bigger and eco-friendly library, opened to the public in October 2013.

With the biggest collections of books of any Songpa district library, Geulmaru aims to provide a “book garden,” where the visitors can relax and harmonize with accessible green areas. Three floors of the four-story library have pathways to an outdoor space where the visitors can mingle and enjoy the fresh air.

“The biggest strength of Geulmaru Library would be its digitalized system and its harmony with the surrounding nature,” said Lee Seung-hak, a librarian there.

The building uses geothermal heat for energy and has several green areas, giving it top marks from the Green Building Certification Program run by the Ministry of Land, Infrastructure and Transport.

If you are looking for a fun diversion, one entertaining option could be the Nokbeon Comic Library in Nokbeon-dong, Eunpyeong District, northern Seoul. This was established exclusively for comic books and graphic novels.

Before the library opened in December, it had been home to an old, neglected police station for years that people considered quite unsightly. But that building was torn down and was replaced by the comic library.

Now, the reinvented location offers a wide collection of comic books, with popular Japanese comic series like “Dragon Ball” and “One Piece” (always popular among young Korean readers) as well as more adult series like “Incomplete Life” and “Gourmet.” It holds some Korean webtoons as well.

Unlike other libraries, the one in Nokbeon-dong doesn’t allow the visitors to borrow the books. Everything has to be read in the library, as organizers feel it is important to keep the series together, so everyone can enjoy them without missing any issues. 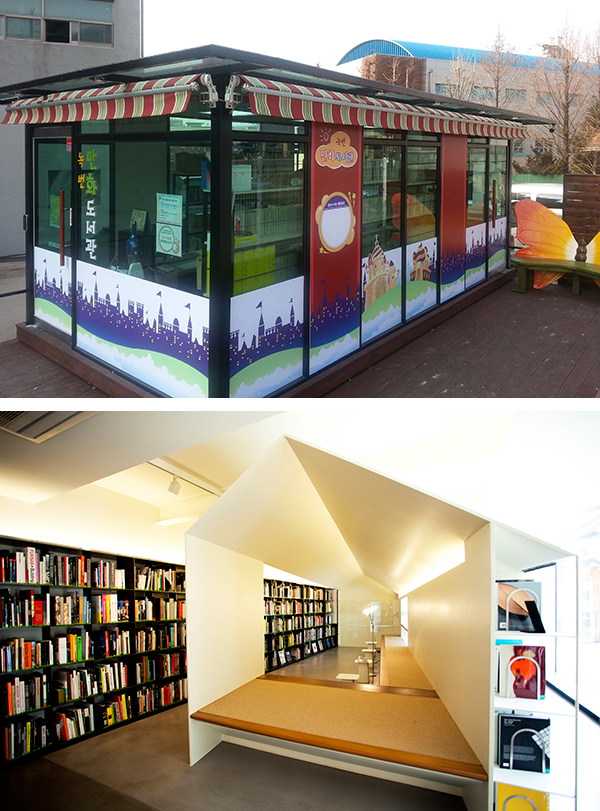 Hyundai Card Design Library, built and run by the huge credit card company, is probably the most impressive collection in Korea for design-related books.

The three-story building, located in old Gahoe-dong in central Seoul, holds about 11,000 books that highlight art trends that emerged after the foundation of the Bauhaus, the acclaimed art school started in Germany in 1919. Its book collection has been chosen by leading curators from around the world based on seven categories: inspiring, usefulness, wide-ranging, influential, thorough, aesthetic and timeless. The organizers say that about 70 percent of the collections have never been seen in Korea before.

One of the noticeable sections in the library is its Rare Book Collection, which is full of hard-to-find and limited editions of famous art magazines, including the entire collection of the American photo magazine Life, running from 1936 until 2007, and Domus, an Italy-based architecture magazine founded in 1928.

The first floor of the library is devoted to a cafe and exhibitions, while its second and third floors are reserved for collections of books and specially designed seats that provide some privacy to visitors.