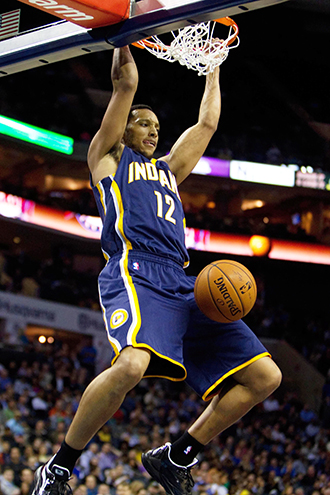 Al Jefferson scored 34 points in Charlotte’s 109-87 victory over the Indiana Pacers on Wednesday night that gave the Bobcats their fifth-straight home win.

Jefferson was 16 of 25 from the field and had eight rebounds for the Bobcats (28-33), who equaled their combined win total from the previous two seasons.

Jefferson, whose 38-point, 19-rebound effort Monday night was overshadowed by LeBron James’s career-high 61-point outing, has scored at least 20 points in 21 of his last 24 games.

Charlotte became the first team since the 2009-10 Knicks to play the NBA’s top four teams in consecutive games. They previously lost to San Antonio, Oklahoma City and Miami on the road, but left no doubt about this one.

Charlotte jumped out to a 28-8 lead after the first quarter and never trailed.

Kemba Walker added 19 points and nine assists for the Bobcats.

Evan Turner had 22 points for the Pacers (46-15), who lost back-to-back games for only the second time this season.

The Pacers had won 14 of their last 15 against the Bobcats coming in, including five straight by an average of nearly 18 points.

But Indiana was sluggish from the start, shooting 4 of 20 from the field in the opening quarter and turning the ball over six times, leading to 12 Charlotte points and falling behind by 20.

The Pacers, shooting at the home end of the floor where some of the lights were out, were held to eight points - the fewest allowed in a quarter this season by the Bobcats.

While the Pacers were struggling on offense, Jefferson was at it again on the offensive end. He hit his first six shots and had 20 points at the break.

The Pacers would battle back to cut the lead to four in the second quarter, but the Bobcats never surrendered the lead and stretched it back to 18 again by the end of the third quarter.

The Pacers came in first in the league in defense in terms of points allowed and field goal percentage. But the Bobcats shot 51 percent, including 9 of 18 from 3-point range.

Just about everything was going Charlotte’s way, including Jefferson banking in a 31-footer from the top of the key to beat the shot clock with four minutes left in the game, giving the Bobcats a 99-82 lead.

Jefferson left the game to a huge ovation with 2:01 remaining and the Bobcats up by 21.

Meanwhile, James Harden scored 31 points, including 25 in the second half, and the Houston Rockets dug out of a double-digit, first-half hole to beat the Orlando Magic, 101-89, on Wednesday night. The Rockets dominated inside, outscoring the Magic 58-26 in the paint. Dwight Howard added 19 points and 14 rebounds in his second trip to Orlando to face his former team.