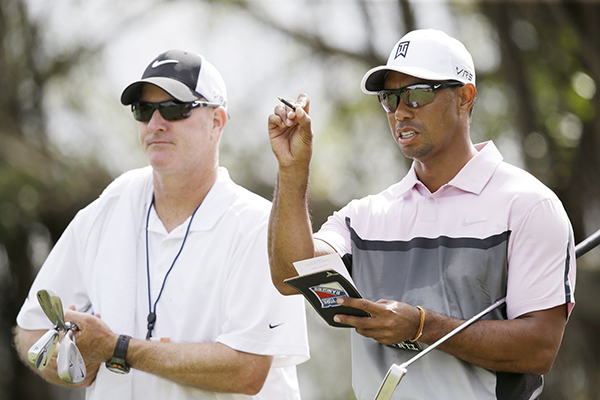 Tiger Woods, right, and his caddie, Joe LaCava, participate in a practice round Wednesday at the WGC-Cadillac Championship golf tournament in Doral, Florida. Woods said he is ready to defend his tournament title and ranking. [AP/NEWSIS]

Tiger Woods, Adam Scott and a nasty Blue Monster will share the spotlight at this week’s WGC-Cadillac Championship in Doral, where a new world No. 1 may be crowned.

Fifty of the world’s top-ranked players have arrived in Miami to take on the famed Blue Monster Course that has been made even more frightening after a $250 million renovation.

Celebrity business magnate and resort owner Donald Trump described the new layout as big, bold and fair on Wednesday and players echoed that assessment, heralding the rebirth of what is regarded as one of the PGA Tour’s toughest courses.

The Blue Monster will provide a worthy stage for a mouthwatering showdown between the world’s two top-ranked players in defending champion Woods and world No. 2 Scott.

If Scott wins the tournament and Woods finishes seventh or worse, the Australian will bump him from top of the rankings.

“I don’t know how Tiger feels about it, but it’s obviously a position [No. 1] he’s pretty comfortable with for a long time throughout his career and I can assure you from knowing him just a little bit, it’s a position he probably wouldn’t want to give up,” said Scott. “It would be a dream come true to make it to that point.”

After withdrawing from Sunday’s final round of the Honda Classic with back spasms, Woods declared himself fit on Wednesday to defend his title and ranking.

In 13 career starts at the WGC-Cadillac Championship, Woods has seven wins, the last four coming at the Doral resort.

While the Blue Monster has been a happy hunting ground for Woods, the 14-time major winner will find himself in strangely unfamiliar surroundings this year, having yet to get a look at the changes.

Woods will be partnered with Masters champion Scott and FedExCup winner Henrik Stenson of Sweden, bringing the world’s three top-ranked players together in a blockbuster group for the opening two rounds.

Another marquee group will feature Northern Irishman Rory McIlroy, who will be bidding to rebound from a heartbreaking loss at the Honda Classic, fan favorite and 2009 Doral winner Phil Mickelson and Australian Jason Day, winner of the WGC-Accenture Match Play Championship.

McIlroy has produced some superb golf of late but has been unable to close the deal.

The double-major winner had led by three strokes after six holes at the Honda Classic only to wobble badly over the back nine en route to losing in a four-way playoff.

“I was just disappointed with how I played coming down the stretch. It obviously wasn’t what I would have liked,” said McIlroy.

“But plenty of positives, getting myself in position to win, it was my third stroke play event of the year, and third chance to win.”