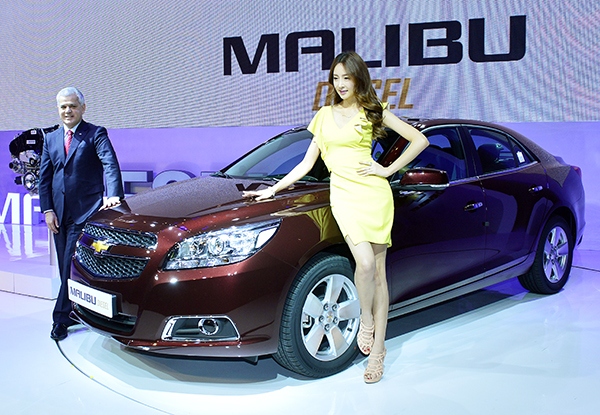 Sergio Rocha, president and CEO of GM Korea, said yesterday that he was pleased with the company’s domestic sales last year, which reached an all-time high in volume, but that he is concerned about upcoming wage negotiations because of the recent base salary ruling made by Korea’s highest court.

“In consideration of the Supreme Court’s decision, we will see labor costs increase and this is not only an issue for us, but it’s going to apply in the whole industry,” Rocha said yesterday.

“But I’m positive that we will find the right relationship with the union. If there is no competitiveness, there will be no sustainability.”

GM Korea, the nation’s third-largest automaker, already suffered a setback when General Motors decided to pull its Chevrolet brand from the European market by 2016. For the first two months of 2014, the Korean division exported 80,439 units, down 24 percent from a year ago.

Rocha said the company is working to deal with the loss of business, especially at its Gunsan plant in North Jeolla, to protect jobs and maintain maximum operations by adopting a two-shift daytime schedule. The Brazilian CEO recently said GM Korea could compensate for the loss of sales in Europe by supplying the market in Australia, where GM has announced the shutdown of its Holden plant.

“GM CEO Mary Barra recently said let’s not confuse progress with winning,” Rocha said. “We still have lot things to do in our journey, but we are moving in the right direction.”

Meanwhile, in a bid to stir a local market where imports are flying high with diesels, GM Korea yesterday introduced a diesel version of its midsize Chevrolet Malibu sedan, which it called first mainstream diesel-powered midsize sedan from a Korean automaker.

The company added that it started production at its Bupyeong plant in Incheon last Thursday and that sales will begin this month.

The market share for diesel vehicles in Korea in 2013 was 31.5 percent in 2013, reflecting an increase of 12.7 percent over the past five years. However, Rocha emphasized that the market share for midsize diesel sedans was less than 3 percent and said that he hopes the Malibu will be a trendsetter.

According to data from the Korea Automobile Importers and Distributors Association (Kaida) yesterday, sales of imports last month were 13,852 units, up 25.3 percent from a year ago, and 69.8 percent of them were diesels.

The company said its weapon will be its 2.0-liter turbo diesel engine manufactured in Kaiserslautern, Germany, by Opel that will provide a performance identical to or better than the European cars.

It was named one of Ward’s 10 Best Engines for 2014, delivering a segment-leading 156 horsepower and 35.8 kilogram-meters (258 pound-feet) of torque between 1,750 and 2,500 revolutions per minute. Accompanied with an Aisin six-speed automatic transmission, the power train provides combined fuel efficiency of 13.3 kilometers per liter (31.3 miles per gallon).