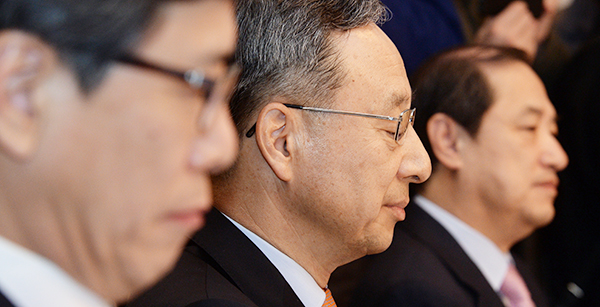 The Ministry of Science, ICT and Future Planning will impose a business suspension of at least 45 days on SK Telecom, KT and LG U+ as early as next week.

The Science Ministry is set to announce details of the punishment today and will impose the sanction recommended by the Korea Communications Commission simultaneously from the end of next week.

It is likely two of the three mobile carriers will serve the suspension at the same time, with the third being suspended at a later date.

The sanction is expected to spark controversy as the ministry said it does not plan to provide restitution for any damage to small smartphone retailers and small and medium manufacturers.

Choi Mun-kee, minister of science, ICT and future planning, met with the heads of the nation’s three mobile carriers and urged them to take special measures to counter illegal subsidies on smartphones.

Choi expressed concern over the household burden of communications costs and the market chaos caused by illegal subsidies and the need to standardize the mobile device market.

“At the meeting, the CEOs of the three mobile carriers and the minister had no disagreement over the decision to impose 45 days of business suspension on two mobile carriers at the same time,” said Kim Joo-han, director of communications policy at the Science Ministry. “However, as to allowing users to get a new smartphone with subsidies, most agreed the government should prohibit it, yet the ministry decided to take more time to consider the matter more thoroughly as there are also claims that it should be allowed to minimize the damage on consumers.”

“Illegal subsidies have not been eradicated despite the KCC’s corrective order to set the ceiling for subsidies at 270,000 won [$254)], and, thus, the government is bound to impose penalties. We hope this will be the last time the carriers violate the law. Should it happen again, the government will apply the maximum penalty allowed,” said Choi at the meeting with CEOs held at the Plaza Hotel in central Seoul yesterday.

“As socially responsible corporations for people, the three mobile carriers should not commit illegal activities.”

The CEOs of the carriers will soon have to come up with measures to eradicate overheating competition involving subsidies on smartphones, stabilize the market and announce a public statement.

The minister also urged the companies to provide nondiscriminative and transparent subsidies while gearing up efforts to alleviate the financial burden of mobile devices.

Furthermore, Choi detailed the problems caused by stealing customers from other carriers through huge subsidies in a saturated mobile device market and asked them to focus on expanding the telecommunications pie by creating new industries related to the Internet of Things and Big Data.

In particular, the Science Ministry emphasized there is no possibility that the period of business suspension will be less than 45 days.

In addition, if the illegal subsidies are provided again by the carriers, even after the business suspension, it will impose a 150 million won fine and a three-year prison sentence.

“The legal basis of this business suspension is different from the disciplinary action of the KCC, as it is to punish the mobile carriers for breaching the correction order,” said Kim. “The 45 days will be the bottom line as we considered the damage that could spread to consumers, retailers and manufacturers. There will be no compromise on that.”

Meanwhile, the science ministry plans to ask manufacturers for active cooperation in eradicating illegal subsidies and cutting the communication costs.