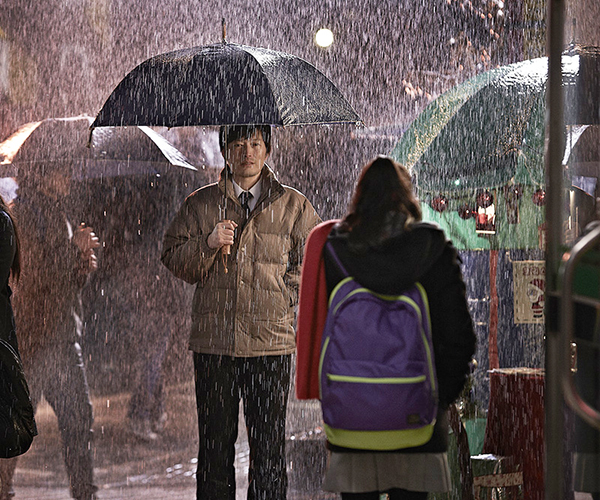 Sang-hyeon, played by Jung Jae-young, left, seeks revenge after his daughter is kidnapped, raped and then found dead in a public bathhouse. Provided by CJ Entertainment

A teenage girl is kidnapped, raped and then found dead in a neighborhood’s public bathhouse. It sounds like a tragic story on its own, but when her father is added to it, everything gets more emotional.

Lee Jung-ho’s latest thriller “Roving Edge” depicts the tragic fate of a father who goes from being a victim to a murder suspect after he kills an 18-year-old boy who he found giggling on a video showing his daughter being violated. The movie is based on a Japanese novel of the same name by Keigo Higashino, but it is just as relevant as any other film based on a true story.

“If I had a daughter, I would have given more thought about taking the role. Although it is just a movie, there are some parts in it that directly connect to real lives,” said Jung Jae-young, who plays the father, Sang-hyeon.

When asked about why he chose the film, Jung said, “I liked the fact that it tried to maintain its objective view about the incident, and wasn’t slanting toward one side.”

However, Lee said he initially didn’t consider Jung for the role of Sang-hyeon.

“I thought he was too young to take the role. I couldn’t imagine Jung playing Sang-hyeon,” the director said. “But that collision of these unlikely images was the critical point in making my decision for Jung.”

In directing the film, Lee’s focal point was to make the story seem convincing, although its roots came from a novel. The movie was filmed chronologically, instead of going back and forth, in a bid to preserve the actors’ natural flow of emotions. Also, Jung was kept from wearing gloves or any additional underclothes when he had to roam about in the snow for hours in the freezing cold in order to express his agony at the extreme situation. “I felt like cutting off my fingers because they were so cold,” said the 43-year-old actor.

However, despite these physical hardships, the hardest part for Jung was something else. “I couldn’t get a grip of what it would feel like to lose my child. Do I have to take revenge? And if I do, what would it feel like? The film contained a lot of scenes that I didn’t even want to imagine, and handling those scenes was really challenging.”

When asked how he felt about the recent death of a father who lost his daughter, Hye-jin, in a kidnap-and-murder case seven years ago, Jung said it would be a “rash act to even assume what he would’ve felt. I think whether to take revenge or forgive is the choice of a father. But one thing that is certain is that no matter what choice he makes, it will not alleviate his burdened mind.”

So, although the film depicts the father taking revenge on the supposed killer, the movie is about more than just his rage. “I tried to do away with just going after the fury. Just like in a Mobius strip [a loop with only one surface and one edge], where everything is tangled together, I tried to step back a little and depict the intermingled relationship of the related parties,” said Lee.