Army to see a reduction in its forces

Army to see a reduction in its forces 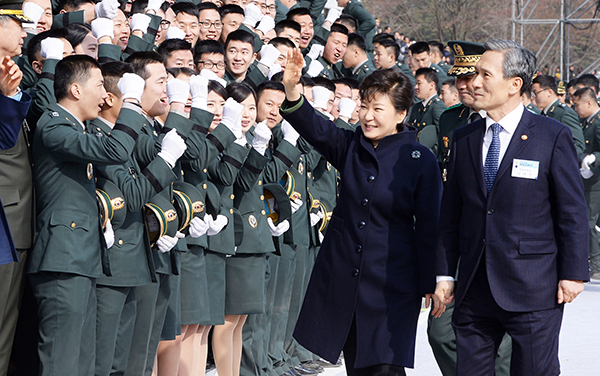 Korea will reduce the size of its Army to 522,000 by 2020, a decrease of 110,000 members, as part of its long-term plan to overhaul the military system and focus more on professional soldiers like noncommissioned officers rather than conscripted recruits, according to the National Defense Ministry’s revised defense plans, which were reported to President Park Geun-hye yesterday.

There will be no changes to the number of naval and air forces.

The amendment to the basic plans for defense reform, first laid out in August 2012, will go into effect this year and will last until 2030. The revisions reflect the security situation in the region and on the peninsula, including escalating threats of nuclear and missile attacks from North Korea, as well as defense-related achievements so far, the ministry explained.

Under the revised plans, the axis of military operations will be moved to respective corps in the frontline area on the border area with North Korea. Currently, it has been conducted by the headquarters, the largest formation in the organization.

The changes will give an expanded role to the corps, the second-biggest formation after the headquarters, and will step up the Korean Army’s operational capacity. “The corps will be leading wars in the future,” said a Defense Ministry official. “If officers in the Air Force are dispatched to each of the corps, the targets will be more accurately attacked.”

At the same time, the number of corps will be trimmed to six from the current eight after the overall number of soldiers is reduced. The number of divisions will be slashed to 31 from 42, and brigades will total 16 instead of the current 23.

Accordingly, operational coverage will be expanded - an issue the Defense Ministry plans to resolve by providing more surveillance equipment to respective divisions and battalions. The Defense Ministry will also delay by a few years the planned merger of the first headquarters of the Army and third headquarters into one, which will tentatively be named the Ground Operation Headquarters.

There are currently four headquarters formations in the Army, and the merger would cut the number of four-star generals by one to seven in total. The new headquarters will have the corps conduct operations beneath it.

The creation of the new organizational structure was originally planned for next year, in tandem with Korea’s scheduled takeover of wartime operational control from the United States on Dec. 1, 2015. But the Korean government has asked its U.S. counterpart to extend the control period, and discussions between the two governments are currently under way.

Despite good intentions, the ministry admitted that the key to reform would be the budget. It estimated that 214.5 trillion won ($201.4 billion) will be needed to complete the overhaul in the next four years. An additional 70.2 trillion won needs to be injected to add defense equipment and another 144.3 trillion won for the increased number of military executives.

For that, an annual 7.2 percent increase in the defense budget needs to be secured.