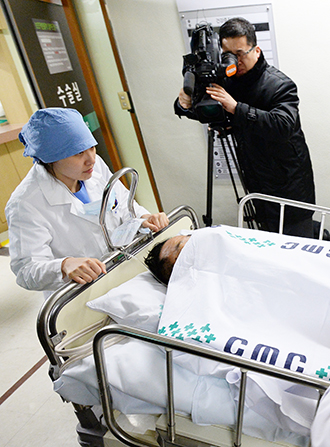 A Korean-Chinese who attempted suicide is wheeled out of surgery yesterday. He has been investigated by prosecutors over falsified documents in an espionage case.[NEWS1]

A 61-year-old Korean-Chinese man, who supposedly cooperated with the country’s top spy agency in an espionage case against a civil servant, attempted suicide on Wednesday after being investigated earlier that day, according to prosecutors.

The man, surnamed Kim, who is a North Korean defector, reportedly sent a text message to the prosecutors implying he would commit suicide.

“I am so sorry, and take care. I am sending this because I may not be seeing you again,” the message read.

After the prosecutors dispatched personnel to locate him, they found Kim several hours later in a motel room. He was unconscious and bleeding by the bed, apparently having sliced his neck with a small knife.

Kim was taken to the hospital and is currently in the intensive care unit after having had surgery.

A four-page suicide note was found at the scene, according to prosecutors, but they refused to disclose the details. Authorities also found Korean words, which possibly denounce the National Intelligence Service (NIS), scrawled across the wall in blood, though the police asked motel employees to remove it after an on-the-spot investigation.

In the espionage case, prosecutors have been working on trying to uncover how the official immigration records of another North Korean defector, who was working as a civil servant in South Korea, were manipulated. Those records were submitted to the court when the defector, Yu Wu-seong, 34, was being tried over allegations of espionage, though they were later found to have been forged.

Kim is known to be the person who provided the NIS with one of three falsified documents, and the prosecution has been looking into whether Kim was involved in the actual forgery, as well as whether the NIS was aware of the falsification.

In January 2013, the prosecution indicted Yu for spying on behalf of North Korea, a violation of the National Security Law, based on a report by his younger sister, who moved from China to Korea in 2012.

Some involved in the case argued that Kim’s suicide attempt is suspicious and could imply guilt.

According to authorities, Kim acquired Chinese nationality, an exceptional feat for a North Korean defector, who the Chinese government usually regard as illegal immigrants. Kim also worked with the NIS, also atypical.

“People usually cut their wrists out of pain or terror, but rarely in their neck,” said a criminal psychology expert who requested anonymity. “The possibility remains that the person may have tried to send a message or that it was done by someone else.”

Meanwhile, prosecutors stated they would continue their probe. “Nothing changes even when such variables happen,” said Yun Gab-geun, a prosecutor. “We’ll keep working to find out what really happened.”