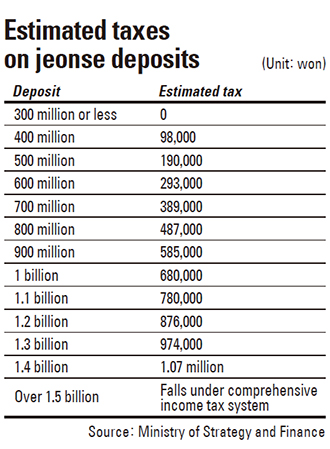 The latest government measures to boost the housing rental market by providing tax incentives are making homeowners upset and confused about the government’s real estate policy as the measures require them to pay tax on rental income, which wasn’t required before.

Realtors across Seoul were swamped with calls from homeowners asking whether they should choose jeonse or monthly rental contracts.

“I received more than 10 calls Thursday morning from clients who have two apartments, one for themselves and the other for investment,” said Choi Ki-hoon, a realtor in Banpo-dong, southern Seoul.

“My clients are getting confused about whether they have to put up their properties for jeonse or monthly rental because of the Wednesday government announcement. Even to professional realtors like me, the government policies seem too complex and confusing.”

Some consumers looking for houses to rent asked Choi whether jeonse deposits or monthly rents are climbing or not as homeowners would want to offset their taxes with higher rents, he said.

Last week, the government first planned to help out consumers who are struggling to find affordable houses by expanding tax deductions for rent and for homeowners who put up their properties for monthly rent.

At the time, it changed the tax deduction system for tenants, in which renters who earn 70 million won ($65,959) or less will be eligible for a tax credit of 10 percent of their annual rent up to a maximum of 7.5 million won.

The government also prepared a tax break for people who own more than two residential units to encourage them to rent out one or more. Rental income of 20 million won or less per year will be separated from the current comprehensive income tax and be taxed at a 14 percent.

A week later, the government said it will apply the same taxation method to jeonse house owners, who have more than two houses, in line with the rule of fair taxation.

The government emphasized that “rental income of 20 million won or less a year will be separated from the current income tax system,” but the market took it as another way to tax more rather than a solution to boost the sluggish market.

Before the recent announcement, those with two houses were not taxed for income earned from jeonse deposits. Those with three houses were.

Such a measure is giving a headache to owners of two houses across the country. There are around 1.15 million people who will be affected by the new tax, according to the ministry.

Those Koreans believed to be in the middle class here own a three-room apartment for their own living and a two-room apartment or a studio for investment.

If Kim wants to make money by renting the bigger apartment out on a monthly basis while he lives in the smaller one, he would need to plan to avoid greater taxes. If he sets the monthly rent at 1.6 million won, or 19.2 million won a year, he would pay 1.07 million won as separated income tax under the new rate of 14 percent.

If the rent is set higher than that, let’s say 2 million won, Kim would not benefit from the new tax system but would pay more under the current comprehensive income tax system in which the rental income is combined with his regular wages (up to 12 million won a year).

Even if Kim decided to put the Mok-dong apartment, whose market price would be nearly 680 million won, on jeonse, he would have to pay at least 370,000 won as tax for the deposit under the new system.

“The latest taxation plan might go against the government’s intention to increase supply of rental houses,” said Kwon Dae-jung, a professor at Myongji University.

A Korea Housing Institute survey showed that about 16 percent of 2,300 homeowners are likely to sell off their idle properties in order to avoid taxation.