As phones have gotten smarter, so have consumers, at least when it comes to choosing what to eat, drink and buy. With the touch of a screen, they can access blog reviews on almost everything - from restaurants to cafes to shopping centers. And this has made life more difficult for retailers.

“Consumers in Korea spend more selectively on what they think is valuable,” said Jason Yun, senior manager at Cushman & Wakefield’s retail landlord representation service team. “In the past, consumers were only able to access information on retail outlets via desktop computers; now they have smartphones.”

This, according to Yun, is bringing constant changes to the country’s retail and real estate industries. An area once considered hot might no longer be hip after only one year.

Eight employees of Cushman & Wakefield Korea’s landlord representation service team sat down with the Korea JoongAng Daily recently for an interview and shared their thoughts on retail trends and up-and-coming locations. Cushman and Wakefield is a global real estate solutions provider based in New York with offices in Seoul and Busan. 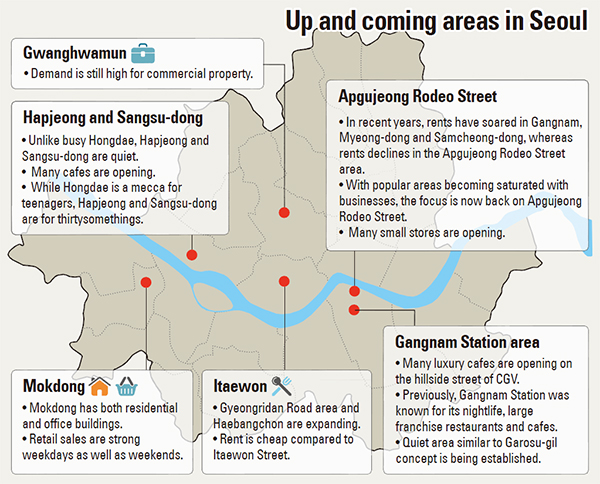 Q. At Cushman & Wakefield Korea, what is the main task of the retail tlandlord representation service team?

A. Yun: One of our main jobs is to be in charge of a commercial facility, plan merchandising and afterward lure tenants. What we do specifically is find mainly fashion brands and food and beverage outlets that would be a good match for a certain commercial facility. In other words, we actually realize the ideas and concepts of a commercial facility. There are two groups - renters and rent holders. We work closely mostly with renters. Because of what we do, there are many experienced workers that join our company and the team. Many of us have a diverse experience at other retail and real estate companies like Lotte Asset Development, being in charge of setting up shopping malls, and GS Retail, being in charge of developing branches.

Based on your experience, what trends do you see in the commercial retail industry?

Yun: In the past, when you visited a shopping mall or a department store, you would find many so-called national brands, like Polo and Giordano. But now, you will find many bonded brands, like the ones at Dongdaemun market. The Parsons brand would be one good example of a bonded brand. [Parsons was created by a group of Korean graduates of the Parsons School of Design in New York.] We try to dig out as many unique brands and lure them to open stores in certain facilities to distinguish them from other shopping malls.

I believe that today, consumers prefer not-so-familiar brands. The same is with foods and beverages. Before, people had a thing for Burger King, McDonald’s and Starbucks, but tastes have become more diverse. Restaurants that are everywhere are not that popular. The Avenue France in Pangyo, Gyeonggi, is one example of our efforts to create a different commercial facility.

The location - Pangyo in Gyeonggi - seems a bit odd as a place to open a shopping mall. It’s not a hip location like Gangnam or Myeong-dong. Why Pangyo?

Shin: There was some doubt about whether Pangyo was the right place. But what we thought was that many consumers in their 30s and 40s that have spending power and saw new brands and trends being introduced in the country in the 1990s now live in Pangyo or Bundang. We thought demand for a commercial outlet in Pangyo was high, just like it is in other areas like Itaewon and Gangnam.

Yun: We consider Avenue France in Pangyo as a successful retail facility. The mall itself is a place for many visitors and almost all of the stores located inside are doing well.

The economy seems to be picking up. Do you see consumer spending also improving?

Yun: It could be seen from macro figures that consumer spending is slowing. But we see it differently. In the past, consumers were restricted to acquiring information. Today, however, there are smartphones. Consumers are able to get information about a popular restaurant in Seorae Village in one touch of the screen. This has also made consumers smarter than before. But more information doesn’t mean they have become more open to spending. What consumers want today is that even though they spend 15,000 won [$14.13] for a meal, they want the value, for example, to be 30,000 won. In the past, families went to a restaurant inside a hotel on special days, but now there are so many places they can go and spend 30,000 won per person, and they get the same luxury environment as in a hotel. We believe consumers today spend very selectively.

The appearance of smart consumers would mean that work has become harder for you?

Yun: Yes. Consumers no longer feel there is something special about big brands like Starbucks, for example. When filling in stores for a commercial facility, we need to think about differentiation. Even when we select a coffee shop, we need to think about which brand we want it to be. What we look for are brands that are not so common and those that only have one or two stores in Seoul. For restaurants operated by large companies, there is no limit on capital. But for those stores run by small businessmen or individuals, capital is restricted. If they run three stores and we offer them a spot in a new commercial facility, then it is only natural for them to be prudent about it because they have to think about many risks. If the fourth store doesn’t run well, it could pose risk to the other three stores.

How do you find these unique stores and restaurants?

Yun: There are many ways. But we try to dig out these places by visiting them. All of our team members love to visit hot and trendy places, even on weekends. When we find a hip place we share the location via KakaoTalk messenger. We take photos, and other people visit the place. We also have a list of hip restaurants in the Seoul metropolitan area and we rate them.

What do you think is the most hip area or has hip potential?

Yun: Personally, I think the alley in between the CGV movie theater, near Gangnam Station, has potential to develop further. In general, when we think about Gangnam Station, we think of nightlife and franchise restaurants and coffee chains. But the new alley being created is different. When you follow the alley uphill toward Yeoksam Station, many owner-operated cafes have opened. This area used to be residential. Some cafes would be three floors high, very big and quiet. It could be an extension of the commercial area in Gangnam but closer in concept to Garosu-gil.

Jake Kim: I would recommend the Itaewon and Apgujeong-dong area. We know big commercial areas like Gangnam and Myeong-dong, and also Sinsa-dong and Samcheong-dong. But the rents in these places have soared. The pattern normally would be that, when rents go up, large companies bring in their own stores and small and charming stores give up and move to other places. When the area becomes home to large fast fashion brands, consumers today no longer find it attractive. As for Apgujeong, however, commercial rents have dropped, and I believe many store owners will turn to Rodeo Street.

Dan Kim: In the past, a popular commercial place would be located in an area where there is good transportation. But now, because consumers have smartphones and are able to find locations on their map applications, accessibility matters less. I think places thought to be good neighborhoods like Hannam-dong and Dongbu Ichon-dong are becoming hip areas. Even in the Itaewon area where Tasting Room and Vatos are located, in the past, it would be difficult to visit these restaurants because they hard to find. But now, anyone can go visit using their personal smartphone map.