Justice Cha looks back on his career

Justice Cha looks back on his career 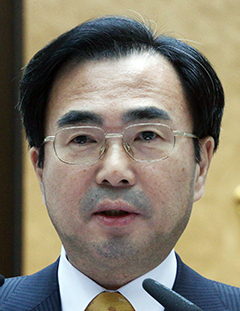 Cha Han-sung, 60, outgoing justice of the Supreme Court, describes his ideological tendency as swaying back and forth from the middle ground.

“While some people take a Supreme Court decision and assume that it is conservative or liberal, judges make decisions based on the case and the principle of law, not based on their beliefs,” he told the JoongAng Ilbo in an exclusive interview on Feb. 24, a week before his official retirement.

Justice Cha, who was also the minister of the National Court Administration and handled general administrative affairs for the court, retired on March 3.

“It is not so easy to decisively judge a person,” he said. “If a decision is reached so automatically due to personal ideological tendencies during a term [as a justice], what’s the point of having a trial?”

Perhaps one of the most well-known examples was when the Supreme Court ruling last year that a series of emergency decrees, including Emergency Decree No. 1, based on the Yushin Constitution of the Park Chung Hee government were unconstitutional, a landmark decision that led to the acquittal of an elderly man convicted on criminal charges for criticizing the government in 1974.

Emergency Decree No. 1, promulgated in January 1974 - part of a series of authoritarian decrees declared by former President Park in the 1970s - banned any criticism or opposition to the Yushin Constitution and allowed Park to arrest any dissident, even without a warrant from the court.

In another case, the Supreme Court ruled in favor of a dismissed Hyundai Motor worker in 2012, stating that a worker hired directly by an in-house subcontractor should be considered a regular worker if he or she stays with the same company for more than two years.

Justice Cha, a native of Daegu, graduated from Seoul National University College of Law in 1977 and passed the 17th National Judicial Examination in 1975.

His first post as judge was at the Seoul Civil District Court in October 1980.

Cha was appointed as a Supreme Court justice in March 2008 and since October 2011 has served concurrently as the minister of the National Court Administration.

At that time, as minister of the National Court Administration, Cha had a role in reigning in controversy resulting from a younger generation of judges posting controversial comments on social networking services (SNS).

“The remarks of a judge have tremendous influence,” Justice Cha said, “but at that time, the younger judges argued, ‘these are personal affairs, and why are you meddling in what I write in my own personal time?’”

“Let us make our own guidelines on what is acceptable,” Cha urged at the time. “Before we are individuals, we are judges.”

A manual on the issue was subsequently produced after a meeting with the judges. “I think if the National Court Administration unilaterally decided upon a guideline and enforced it, there would continue to be strife and objection,” he said.

Cha added that he has no intention of working at a law firm after his retirement. “If I have an opportunity, I would like to teach my juniors,” he said, regarding his retirement plans. “What remains is time, so I will think about it slowly.”