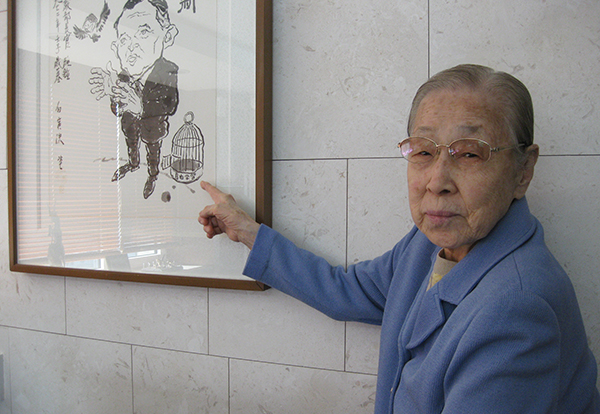 Kim Young-ho, the widow of Min Gwan-sik, with a caricature of her late husband at a scholarship foundation office set up in a former warehouse. By Wee Moon-hee

Min Gwan-sik, one-time minister of culture and president of the Korean Olympic Committee, is often dubbed “the father of modern sports” in this country.

He dedicated much of his public service career to promoting sports and played a key role in establishing the Taereung National Training Center, where national-level athletes prepare for international sporting competitions.

Min was known as an avid collector of sports medals, letters written by presidents and sports souvenirs.

Although he died in 2006, people can get a glimpse of his life through a permanent exhibition that displays his collections, an exhibition housed at the Gwanggyo Museum in Suwon.

“When the museum transported his collections to the exhibit place, they needed several vehicles because of the number of items,” said Kim Young-ho, Min’s widow. 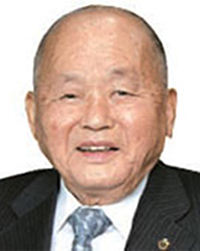 A total of 30,000 pieces of Min’s collection will be displayed at the museum for an indefinite period. Most of the items are linked to sports or athletic events.

“When he served as a public official in the 1960s and 1970s, it was hard to travel freely,” Kim said. (The government sharply limited international travel to conserve foreign exchange.) “So whenever he went out of the country, he bought a bunch of items such as memorial badges.”

One of the highlights of the collection is a letter to him from then-president Park Chung Hee. It says, “I am aware that the construction [of the Taereung Training Center] faces financial troubles. But the government is now unable to provide enough financial assistance. I’d like to consider the issue more thoroughly when working on next year’s budget.”

The short letter indicates how tough it was to obtain enough funding to build the training center. At the time, the project was unprecedented, and would cost an estimated 200 million won ($188,000).

A home for national athletes, the center consists of 24 buildings and includes training facilities, gymnasiums and dormitories spread out over 100,000 square meters (25 acres).

Min’s enthusiasm for collecting was well known, and many people visited his house to explore his curios. Among them was Juan Antonio Samaranch, former president of the International Olympic Committee, who appeared there during a visit to Korea before the 1988 Seoul Olympics.

An Asian Games swimming gold medalist, Cho Oh-ryun, even donated one of his gold medals to Min. The donation was intended to express gratitude and acknowledge Min’s efforts to build the training center.

“I believe this exhibit is not just showing what a person had,” said Kim Se-young, a staff member at the museum. “Rather, it allows us to learn the history of how Korea’s sports program has progressed.”