Gyeongnam, Ulsan get off to great starts

Gyeongnam, Ulsan get off to great starts 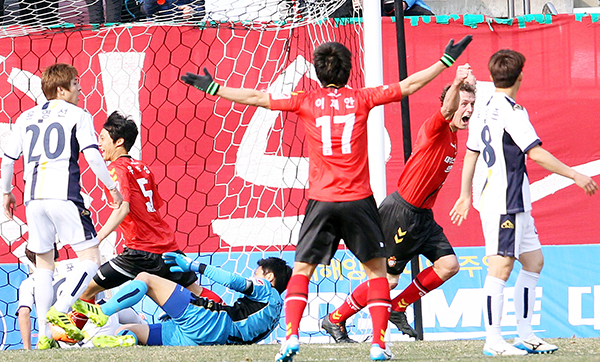 Luke DeVere of Gyeongnam FC, second from right, celebrates after scoring the winning goal against Seongnam FC yesterday at the Changwon Football Center in South Gyeongsang. By Lee Ho-hyung

Neither Gyeongnam nor the citizen-funded Seongnam, led by Coach Park Jong-hwan, who came back to the K-League Classic for the first time in nine years, impressed fans as they focused on not giving up goals rather than scoring them. The match was a “must-win” game for both teams, which are considered to be in the league’s lower ranks.

After a boring first half, Gyeongnam replaced forward Song Ho-young with Serbian attacker Milos Stoynanovic to strengthen the team’s offense. The team missed many scoring chances, including a one-on-one chance that forward Song Soo-young had against Seongnam goalkeeper Kim Young-gwang in the 75th minute. But in the corner kick situation in the 89th minute, Luke headed the ball into the net, giving three points to Coach Lee Cha-man.

Park, 76, failed to win his comeback match due to a weak offense.

Seongnam tried to increase its ball possession in the midfield area with short passes, but those passes weren’t good enough to create scoring chances. It looked like Park needs more time to show his football style not only to the fans, but also to his players, including striker Kim Dong-seob, midfielder Server Djeparov, Kim Tae-hwan, Park Jin-po and Kim Cheol-ho, who sometimes looked like they had no idea what they should be doing on the field.

“It’s too early to be disappointed,” Park said. “We will get better in the next match.”

Meanwhile, during Saturday’s opening match between the 2013 season champion Pohang Steelers and the runner-up Ulsan Hyundai Tigers, the 196-centimeter-tall (6-foot-5) striker Kim Shin-wook, 25, led Ulsan to a 1-0 revenge win over the Steelers. In last season’s final match, the Tigers lost to the Steelers, 1-0, ending their dream of winning the league’s title trophy for the first time in eight years. Before that match, the Steelers trailed the league-leading Tigers by two points, but the Tigers lost the match on a goal by Steelers’ defender Kim Won-il in the 95th minute.

In the first-round match held at the Steelyard in Pohang, North Gyeongsang, Kim scored in the 82nd minute in a one-on-one situation against Steelers’ goalkeeper Shin Hwa-yong, giving a victory to Coach Cho Min-kuk in his K-League debut.

Kim said that he wasn’t in good shape as he came back to the country on Friday after a friendly match against Greece on Wednesday, which Korea won, 2-0. Kim played the second half in that match. “I can’t even remember how I played today,” Kim said Saturday. “I only focused on scoring a goal and I’m happy that I completed the task.”

Cho made Kim play a full match, but Kim looked like he was tired because he wasn’t as aggressive as he used to be in set-piece chances. He also didn’t run very fast.

“I didn’t even participate in the team’s training sessions before the match because I wasn’t physically ready,” he said. “But I volunteered to play because the opponent was the Steelers. Last season’s match against the Steelers was the worst moment in my entire career because I couldn’t do anything for my team.”

Kim wasn’t able to play in that match due to accumulated yellow cards.

The Steelers, in fact, played better and created many scoring chances with short passes and attempted more shots than the Tigers did, but there was no striker to score for Steelers’ Coach Hwang Seon-hong. The team had to release veteran forwards Noh Byung-jun and Park Sung-ho due to the financial difficulties of its sponsor conglomerate, Posco.

“I know what the problem is,” he said. “But we can’t just sit and complain about it. I will try to utilize my players more efficiently.”

The Jeonbuk Hyundai Motors, led by former Korean national team Coach Choi Kang-hee, who are considered one of the strongest contenders for the league title, overpowered Busan I-Park, 3-0.