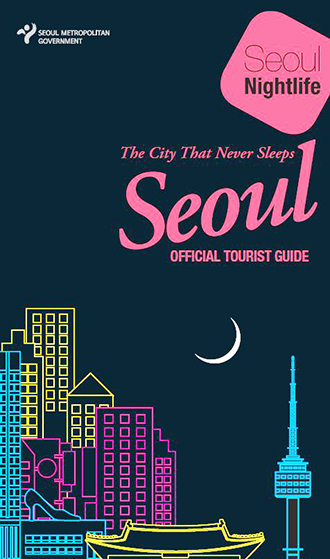 The Seoul Metropolitan Government yesterday published a guide book for nocturnal travelers. The book, aptly titled “The City That Never Sleeps,” presents 58 shopping malls, clubs and restaurants that operate around the clock, or late at night, in popular areas of the city.

The featured hangouts include some in the Myeong-dong, Dongdaemun Market, Gwanghwamun, Sinchon and Hongik University neighborhoods.

The list of stores and restaurants is the result of a survey that the city conducted. It asked local residents, foreign travelers visiting Korea last year and authors of travel books to contribute their ideas about what hot spots to include.

City officials said they tried to break away from the old and plain way of explaining the featured destinations, opting instead for contributions by travelers and more narrative-oriented explanations. It also asked each district office to name places frequented by foreigners for inclusion in the guide.

“People would think that a guidebook published by a city government would be a little boring and not that exciting,” said an official at the tourism policy division of the city government. “But we really want to show what people are looking for. So we decided to carry out a survey.”

As for the reason why it decided to compile a list of places for wee-hours excitement, the official said, “That’s what distinguishes Seoul from other cities.”

“CNN described Seoul as the city that never sleeps. Most European cities become dark and silent at night. But you can feel that Seoul becomes energized and more vibrant late into the night,” the official said.

Alongside the introduction of late-hour haunts, the book also contains practical information such as where foreigners can use ATM machines at night and which hospitals can help in an emergency.

The tourism policy division said it plans to add more data about nightlife in the future.

“In the daytime, Seoul seems like a district where people are busy working,” said Kang Tae-woong, director of the division.

“But during the night, we can capture a different side of Seoul, more energetic and active. I thought that it could appeal to people outside of Korea.”

The city government plans to distribute the booklets at Seoul’s global centers and at airports.

The e-book version of the guide is available at the website of Visit Seoul (www.visitseoul.net).