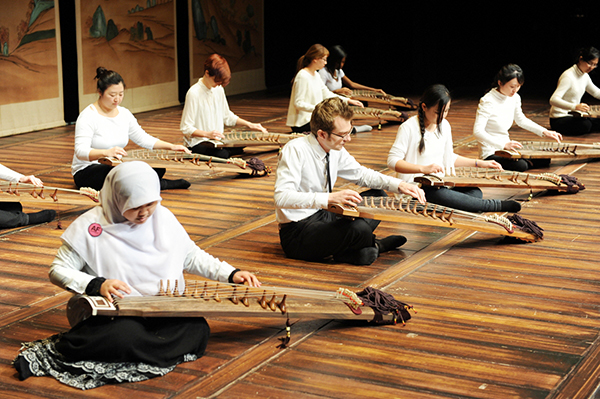 Foreigners play the gayageum, a traditional Korean string instrument, in a group after their lessons at the National Gugak Center. Provided by the center

Lisa Carman, a 30-year-old teacher from Canada, says some of her Korean friends have told her that she is more Korean than they are.

That’s because she knows how to play several traditional Korean instruments, including the gayageum, a string instrument, and the janggu, a type of drum. She started taking classes three years ago at the National Gugak Center in Seocho District, southern Seoul. Gugak is Korean for music.

“It was a good opportunity to learn many different instruments, [because] learning anything new and making progress is exciting,” said Carman, who took classes until last fall. “Another reason for me to keep taking classes is because of the people I got to know who were there.”

Anyone with such an interest in Korean music doesn’t have to keep it to themselves, especially expatriates who have been reluctant to learn due to the language barrier. The center is offering more lessons in English to foreigners until May.

There are classes for three instruments offered: janggu, gayageum and haegeum (which is another kind of traditional string instrument). Those with previous experience on the gayageum can take an advanced class to get a better understanding of the basic instruments used in Korea’s traditional music performances. The class will be offered every Saturday morning for two hours.

To make the class easier for gugak novices, instructors will not only teach their students how to play traditional tunes such as “Arirang,” but also the soundtracks from popular Korean dramas or well-known folk songs enjoyed in other countries.

“Foreigners not only learn to play the Korean traditional music, but also get to play various music genres within the program,” said the center, which began its first class in 1993.

Musical instruments will be provided by the center.

To make the learning process more fun and rewarding, the center will invite all students to the stage in Yeak-dang, its main theater, for a group performance on the last day of the program on May 24.

Any foreigners who are interested in the program can apply to join, even though the first class has already started. Interested parties can find the application on the center’s website and send it electronically.

Up to 25 people can sign up for the janggu class, while the haegeum class can take 15. There are elementary and intermediate courses for the gayageum; the former can hold up to 20 students while the latter can hold 10.

The center said it will continue accepting more people throughout this week because classes still have some openings.

For those who can’t participate this time, another around of classes will be offered in September.