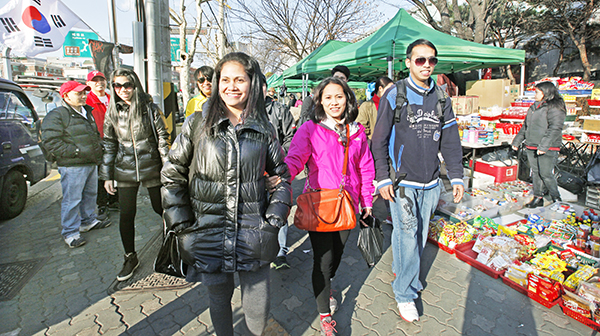 Margie Garalde, center, a Filipino who moved to Korea after marrying a Korean man, often visits the Philippine market in Hyehwa-dong to find a connection to her home country. By Park Sang-moon

For Margie Garalde, a Filipina who moved to Korea to join her Korean husband two years ago, Sunday’s Philippine Market in Hyehwa-dong, northeastern Seoul, is more than just a place to purchase food or goods from her native country. The open-air market, located on a sidewalk between Hyehwa Catholic Church and Dongsung Middle School, is a focal point of the Philippine community in Korea, where hundreds of Filipinos gather to converse.

The trip to the market from her home in Hwaseong, Gyeonggi, takes about two hours each way, but she rarely misses the weekly event.

“Whenever I come to this place, it feels like home,” she said. “I can make a lot of new friends here because people have many things in common and share what it’s like to live in a foreign country, talking about troubles or fun happenings.” Garalde, who had just joined a group of her friends, is just one of the legions of Filipinos who make regular visits to the market and its connection with home. 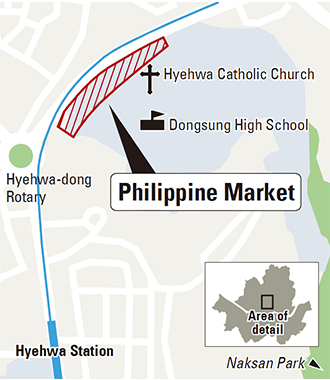 Aside from providing a chance to socialize, the street market also has an important role as a specialized market. Working from 10 a.m. to 5 p.m. every Sunday, vendors sell a wide range of imported goods such as tinned fish, fresh papaya and dried mangoes as well as Filipino specialties such as pork adobo, pancit, or noodles, and lumpia, or egg rolls.

The location is a natural one for Filipinos, about 80 percent of whom are Catholic, to gather in because of its proximity to the Hyehwa church. The parish is the only one in Korea to offer a mass in Tagalog, the major Philippine dialect.

The influx of Filipinos into Korea continues to expand. Their number is now approaching 39,000, according to data from the Ministry of Justice. Filipinos are the fourth-largest foreign ethnic group among long-term residents here, the ministry said. It defines long-term residents as those who have lived in this country for more than 90 days.

The lure of Korea is its better salaries, although migrant workers are often denied the minimum wage. The increasing number of Filipinas marrying Korean men is driving a further expansion of the community.

With those numbers, it might be no surprise that about 600 Filipinos gather at the cathedral every weekend. The church has offered the Tagalog mass since 1995, and the market was started at about the same time.

“The development of this market goes hand in hand with that of the church,” said a 33-year-old Filipino who has been selling groceries and daily necessities for more than 10 years.

The man, who only gave his first name, Ryan, floated the idea of selling goods to other Filipinos attending mass there.

“When people met at the church, they would talk about what they missed from the Philippines. I could sense that people were seeking out a market for familiar food and company,” Ryan said.

“The market at its present size was first developed about 15 years ago, but smaller vendor sites and individual sellers existed a long time ago,” he added.

Beginning with the dispatch of more than 7,000 troops to support the South during the 1950-1953 Korean War, Filipinos have maintained a strong presence on the Korean Peninsula even before the influx of migrant workers and foreign wives of the past decade.

But the introduction of the Employment Permit System in 2006, a government-supported employment program, brought a watershed moment.

Many Filipinos fill low-skill positions in the manufacturing and construction businesses. This is why the largest number of workers from the Philippines lives in Gyeonggi, which is home to many large factories and industrial complexes. 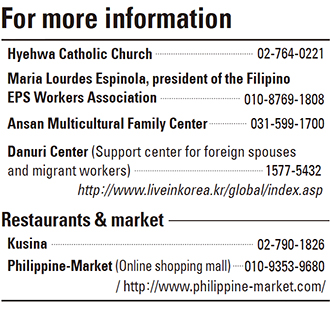 An association of those employment-permit workers in Korea set up its office next to the Philippine market area. The small center is dedicated to helping these workers adapt to a new life and to help settle disputes with Korean companies.

On the first floor of the same building is an Woori Bank branch, distinguished from other branches because it is open on Sunday for Filipino customers only. “Koreans can’t use the bank on Sunday,” said Ahn So-hyang, a bank employee.

“We open on Sunday to offer services for Filipinos because we noticed that many of them flock to the market every Sunday,” she continued. “The services we provide are convenient for them, especially for remittances.”

The market itself is not big, but it has a lively atmosphere, and there is always the possibility of finding a bargain among the stalls of canned goods and coolers of inexpensive meats.

Known for their warm, openhearted personalities, the Filipinos there are friendly and outgoing, often bursting into laughter while chatting with each other. Lining up along the road one recent Sunday, vendors were busy arranging goods, cooking food and greeting each other. The busiest stalls were those selling hot food, which are located at the center of about 20 vendors. They sell savory Filipino sausages, fried rice, deep fried spring rolls and curries. For 6,000 won, you can choose two dishes and a side order of rice.

The Daehangno area of northeast Seoul has long been famous for starving artists, B-boy shows and a number of theaters featuring up-and-coming stage actors. Surrounded by several university campuses, the district is full of unique cafes and restaurants that attract young people.

After enjoying the sights of the market, a visitor can walk up to Naksan Park on the hillside nearby. At the top of the small park is a series of stone walls with battlements, part of a much larger structure connecting major and minor gates of the ancient city of Seoul.

Visitors can take a leisurely stroll or enjoy a panoramic view. Benches line the park’s path, and the natural scenery is unparalleled.

To get to the Philippine market, take subway line No. 4 to Hyehwa Station, Exit No. 1. Walk straight toward Hyehwa Catholic Church and you’ll see the market on the right.

*The number of foreign residents in Seoul is rapidly increasing and this shift has spawned various enclaves for expatriates from all over the world, including Russia, Europe, the United States, Africa and Central and Southeast Asia. The Korea JoongAng Daily will visit each neighborhood and provide a portrait of its residential life in a series of articles, with information about restaurants and places residents and visitors alike would like to experience. -Ed.