Celebrities, whether famous actors or the hottest sportsmen, and product endorsements have always been close bedfellows, as was proven once again by Ellen DeGeneres’ “selfie” tweet at the Oscars last week.

But more noticeable in recent years is the economic influence of Korean celebrities that has expanded beyond the border to major overseas markets like China, on the back of the cultural phenomenon known as Hallyu, or the “Korean wave.” The products endorsed by Korean celebrities are no longer limited to fashionable clothing and luxury bags but extend even to intangible products like smartphone apps.

That trend has been reinforced by a hit Korean TV drama that recently ended, titled “My Love from the Star.”

The protagonist, Cheon Song-yi, was played by the 33-year-old actress Jun Ji-hyun. Anything she wore, used or even commented on sent ripples through related businesses in the domestic fashion market, and even to poultry farms in China and Korea.

The market is seeing a booming demand for “Cheon Song-yi fashion items,” pieces that the character wore on screen, including lipstick, bags, coats, pajamas, and more. Stocks have been exhausted, but interest remains. The head of a women’s fashion department at Lotte Department Store, Jo Hwan-sup, said, “We’ve completely sold out jackets and trench coats that Cheon Song-yi wore in the drama, and had to place additional orders.” He added, “The women’s fashion industry, which was stagnant during the last winter season, is now enjoying the “Cheon Song-yi effect.”

That effect is not only playing a role in the fashion industry but in others as well. Items she used on screen, such as cameras, smartphones, Internet messenger apps and automobiles are all drawing great attention from the public. Places that appeared on screen or are mentioned in the drama are packed with visitors. N Seoul Tower at Namsan Mountain has become a tourist attraction since she mentioned the place in the drama as a spot she wanted to visit on a date. One restaurant near Seoul City Hall has seen its patrons double since the place appeared in the drama with a hint that it had been the favorite long-time hangout of the drama’s leading male character, Doo Min-joon (played by Kim Soo-hyun, 26). 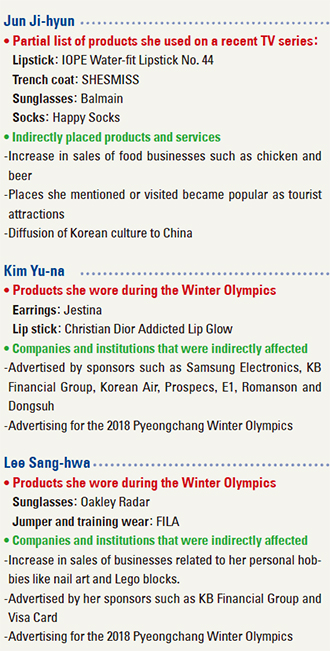 Hwang Mi-jung from the Korea Chamber of Commerce and Industry noted, “A single celebrity creating an economic effect isn’t just a way of marketing but is more of an economic phenomenon in itself. Such a phenomenon is spreading with the help of advancements in information technology and the social desire to share information.”

To those who believe the phenomenon has been more effective in revitalizing the domestic market than economic measures introduced by the government, it has been tagged “Cheon Son-yi-nomics.”

The drama’s seismic waves in China have even come to the Wall Street Journal’s attention. The U.S. newspaper reported on Feb. 26 that a meal of chicken and beer has become popular in China thanks to Ms. Cheon’s taste buds. The Chinese equivalent of Twitter, Weibo, had more than 3.7 million postings related to chicken and beer while the drama was on the air. BBQ, a Korean chicken franchise with 155 stores in China, hurried to introduce chicken and beer specials on its menu there.

A manager at BBQ headquarters, Gwak Sung-kwon, said, “We saw a 30 percent increase in sales last month, including a 50 percent increase in nighttime sales. We broke a record and marked the highest sales last month since the time we entered the Chinese market.” The Chinese Xinhua News Agency reported, “Despite growing damage to poultry farms due to the wide spread of avian influenza in China, Chinese people are waiting two to three hours in line to bring chicken home. Domestic chicken sales are also recovering from the AI damage; domestic chicken franchises said that their sales have recovered to their earlier averages since last month.

Fashion and chicken are not the only industries that have seen the influence of the TV show. The mobile messenger app Line, developed by the nation’s largest web portal company, Naver, has seen downloads of its app surge in Korea since the protagonist used it on the show. Its rival, Kakao Talk, dominates the local market, and Line has always been an also-ran. Though the market shares are still lopsided, Line has amassed more than 10 million users at present, up from only about 3 million subscribers late last year. Since it appeared on the TV show, Line has been downloaded about 600,000 times a day. As of Feb. 27, the last day that the show aired, Line ranked 14th among the most popular apps downloaded from Apple’s App Store in Korea. On the same day it ranked 10th on Google Play. About 45 days ago, when the messenger app first appeared on the show, it ranked 81st in the App Store and 72nd on Google Play.

“Thanks to the product placement, we have seen our subscriptions in Korea increase significantly,” said an official at Naver. “There is more interest in our Line characters.”

Such an impact is not only limited to the influence of an actress; even female Olympians are influencing consumers.

A gold medalist in 500-meter speed skating, Lee Sang-hwa, 25, and the figure skating queen Kim Yu-na, 24, both have had a great economic influence on the Korean market. Sales of Oakley’s radar sunglasses, which Lee wore in Sochi during her race, jumped 110 percent compared to those of last year according to an online shopping mall, Auction. Training clothes and jackets by Fila that Lee wore before her race tripled in sales. The earrings that Kim Yu-na wore during her performances were from a domestic jewelry brand, Jestina, and also grabbed attention. Even a brief view of Kim putting on lipstick before her performance was noticed by sharp-eyed viewers, identified online and offline as a Christian Dior product.

There is more to be told about measuring the economic effect of the two athletes. Based on an estimate by the Sports Industry Marketing Center at Hanyang University, the direct economic effect of Kim Yu-na has been nearly 1.8 trillion won ($1.7 billion), beginning when she won a gold medal at the 2010 Vancouver Olympics. Products were named after her. There is a “Yu-na phone” and “Yu-na savings” accounts. Her name became a brand itself, and her commercial impact (inevitably) became known as “Yu-nanomics.” Her indirect economic effect was even greater, an estimated 3.4 trillion won.

The actor Bae Yong-joon, 42, is another celebrity who created a trillion won of economic effect in Korea and 2 trillion won in Japan, as estimated in 2003 by Hyundai Research Institute. He starred in a wildly popular Korean drama titled “Winter Sonata.”

A senior researcher at Hyundai Research Institute, Lee Boo-hyung, said, “Considering the speed and scope of information spread, the economic impact a single celebrity can bring to the market is far greater than that of 10 years ago. The former chief of the institute, Choi Byung-gil, commented, “We are now living in a world where one celebrity can feed up to 100,000 people. It is undeniable that the economic leverage of a celebrity is greater than ever.”