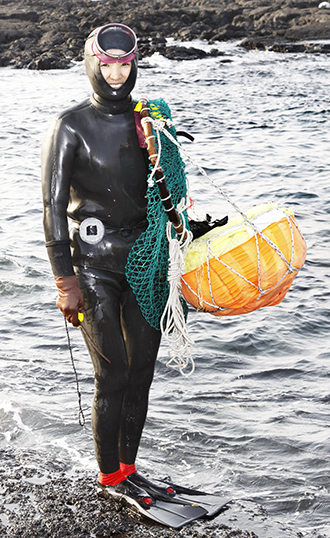 A Korean haenyeo poses in a diving suit, carrying a basket to control buoyancy. [JoongAng Ilbo]

With the Korean government’s plan to register the haenyeo, Korea’s tradition of women divers, as a Unesco’s cultural heritage, many experts are now focusing on whether the intangible cultural practice will be recognized as Korea’s own or if it will have to be shared.

While the Cultural Heritage Administration is gearing up to submit its request this month, the Japanese government has also started to review having the culture of its female divers, who are called ama, be internationally reckoned as an intangible asset.

Japan reportedly has been having a hard time filing all the documents needed for the registration, with the deadline coming up this month. Most significantly, the Japanese government has not yet registered the ama’s tradition of diving to catch seafood as a cultural asset yet, which is a step required for Unesco recognition.

If everything goes as scheduled, the registration of haenyeo culture, which is mostly found on Korea’s largest island of Jeju, will be decided toward the end of next month at a Unesco-governmental committee meeting. However, there are worries that Japan might try to work up public opinion during the inter-governmental process, pointing to shared elements between the culture of haenyeo and ama. Japan could wait until next March to file the relevant documents for registration and then request that the global body consider co-registering the two countries.

“It is hard to say that there is no possibility that such scheme could work, pushing the registration of haenyeo back until 2016,” said Bak Sang-mee, professor of international studies at Hankuk University of Foreign Studies.

If that scenario really plays out, single registration or co-registration would depend on whether the Unesco committee members see more similarities or differences between the two countries’ diving cultures.

In “Samguk Sagi,” the historical record of the Three Kingdoms of Korea written in 1145 by Kim Bu-sik (1075-1151), Kim writes of how women dug up pearls in the sixth century, which strongly implies they were diving underwater. The Chinese document “The Records of the Three Kingdoms,” written by Chen Shou (233-297), also records some seafood being caught underwater in the third century. However, the appearances of such women making a living as divers arose in the early 20th century.

There are no big differences in the gear and outfits used by the divers in Korea and Japan. Both wear wet suits and carry a round bag to control buoyancy. Divers also use the bag to help them rest or to keep their underwater harvests safe.

The biggest difference between the haenyeo and ama is gender. While Japanese divers work with men, who pull up the women from below using ropes, Jeju haenyeo work without any male help. 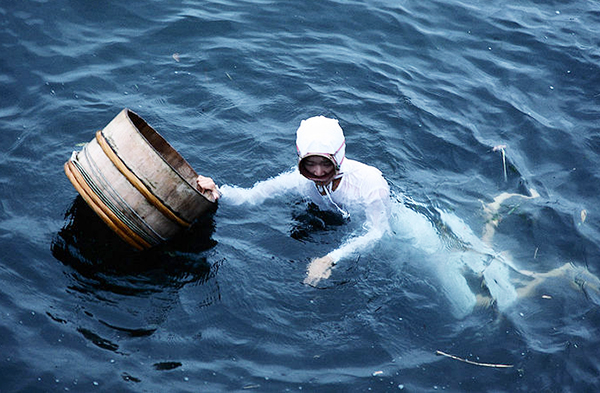 It is said that there used to be male divers, but they disappeared after the government taxed them too heavily during the Joseon Dynasty (1392-1910). Later on, the job became something only women did, and they even developed many songs related to their labor to forget about the hard work. They formed a strict hierarchy based on the skills each individual had. They were tenacious, and in 1932 they even gathered to fight against Japanese forces. Such a strong and tough spirit did not exist within the diving culture in Japan.

“We think there is a good chance that haenyeo culture will be registered by the end of next year as we are writing our registration request based on that spirit of haenyeo in Jeju,” said Professor Park.

If haenyeo gets to be registered first, Japan’s ama culture can only be registered with Korea’s assent if it wants both cultures to be registered under the same category. If that doesn’t suit Japan, it has to focus on other specifics of its diving culture so that the two can be considered different forms of intangible heritage assets.