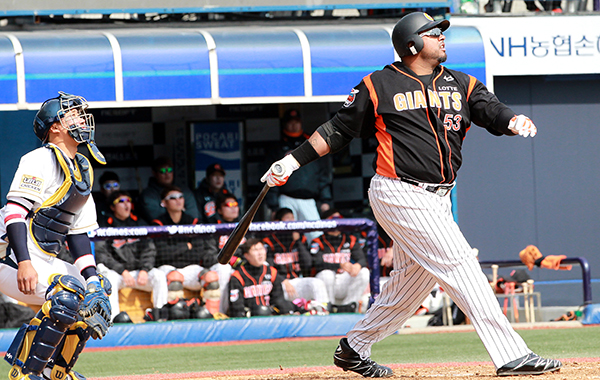 Luis Jimenez of the Lotte Giants, right, reacts after hitting the ball in the second inning of Sunday’s preseason game against the NC Dinos at Masan Stadium in South Gyeongsang. Jimenez homered in the sixth inning. By Lee Ho-hyung

Watching home runs fly off of bats and seeing young rising stars are just two of the many fun things to watch in baseball. Fans who saw the Korea Baseball Organization’s two-game preseason opening games last weekend saw that the 2014 season could be full of such moments. Veteran sluggers such as Hong Sung-heon of the Doosan Bears and imported bats such as Luis Jimenez showed off their power by blasting home runs and some young prospects, such as rookie pitcher Choi Young-hwan of the Hanwha Eagles, attracted admirers. In particular, Choi amazed fans with his 150 kilometer-per-hour (93 mile-per-hour) fastball.

In the eight preseason games held on Saturday and Sunday, hitters hit 12 home runs - twice as many as were hit in the 2012 and 2013 preseason openers - exciting fans who have been waiting for baseball to wake up from its long slumber. It’s too early to say the league will have more home runs based on only two days of preseason games, but analysts have been saying that having at least one imported bat would improve the league’s batting thanks to each team’s higher quota of foreign players. The teams were allowed to have two foreign players until the 2013 season, but now they can have three. Last season’s rookie team, the NC Dinos, is the only club that can have four foreign players.

During the weekend, the Busan-based Lotte Giants enjoyed that adjustment the most. In Sunday’s game versus the NC Dinos at Masan Stadium, the team’s veterans - second baseman Cho Sung-hwan and first baseman Jang Sung-ho - along with their Venezuelan imported bat, Jimenez, hit home runs in the team’s 14-6 win over the Dinos. Jimenez’s 120-meter (394-foot) home run elicited exclamations from fans when his line drive went over the fence like a missile.

Veteran third baseman Lee Bum-ho of the Kia Tigers hit a solo home run against defending champion Samsung Lions on Sunday and DH Hong Sung-heon of the Bears hit one against the Nexen Heroes on the same day. Rookie infielder Kim Hoe-sung, 29, of the Eagles and outfielder Kang Ji-kwang of the Heroes also hit home runs in the preseason’s opening week.

The foreign hitters who many clubs signed - including Luke Scott of the SK Wyverns, Jorge Cantu of the Doosan Bears and Jimenez - are projected to hit in the middle of their lineups and ease Korean hitters’ burden in producing extra-base hits. Scott will be paired up with the league’s best third baseman, Choi Jung, who hit .316 with 28 home runs last season, and Cantu is expected to lead the Bears’ offense with left fielder “hitting machine” Kim Hyun-soo, who hit .302 with 16 home runs last season. Jimenez and slugger Choi Jun-suk, who joined the Giants as a free agent this offseason, are expected to combine for 40 to 50 home runs.

After many of the league’s top pitchers left the country - including Ryu Hyun-jin of the Los Angeles Dodgers; closer Oh Seung-hwan, who joined Japan’s Hanshin Tigers this season after posting a record of 28-13, with 277 saves, 625 strikeouts and a 1.69 ERA in 444 games in nine KBO seasons; and right-hander Yoon Suk-min, who joined the Baltimore Orioles - many analysts predicted the league would be a “hitters’ league” this season. The league has been more of a “pitchers’ league” since 2010 because many sluggers such as first baseman Kim Tae-kyun and infielders Lee Bum-ho and Lee Dae-ho went to Japan.

There are also some young prospects that are expected to make their KBO debut. Right-hander Choi Young-hwan, who joined the Eagles after graduating from Dong-A University, threw two scoreless innings in two games against the Wyverns. The Wyverns also showed off left-handed pitcher Park Min-ho, an Inha University graduate. He pitched one scoreless inning against the Eagles on Saturday and retired the Eagles’ veterans, including the team’s cleanup hitter, Kim Tae-kyun. The Tigers are also testing out shortstop prospect Kang Han-wool, while the Dinos are monitoring Kang Min-kuk, a prospective infielder.