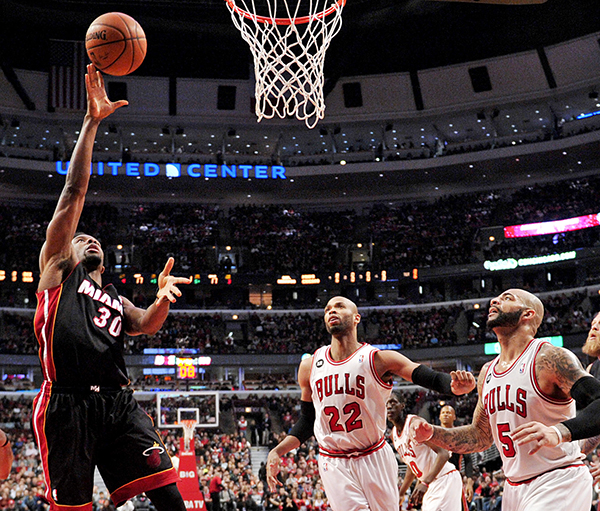 Miami Heat point guard Norris Cole, left, shoots against the Chicago Bulls during the first half at the United Center on Sunday. [USA TODAY/NEWS1]

The real victory for the Chicago Bulls will come when they’re knocking the Miami Heat out of the playoffs, not during the regular season - no matter how charged the atmosphere is.

Even so, they’ll take this.

Noah had 20 points and 12 rebounds, D.J. Augustin scored 22 and the Chicago Bulls beat the Miami Heat, 95-88, in overtime Sunday after Butler blocked LeBron James at the end of regulation.

“I want what they have - a championship,” Noah said. “One day, we’re going to have to get through those guys.”

The Heat have owned them when it counts in recent seasons.

With a healthy Derrick Rose and the No. 1 seed in 2011, Chicago fell to Miami in the Eastern Conference finals.

Last year, with Rose out, the Heat knocked off the Bulls in the second round on the way to their second straight championship.

“It’s still a good win,” Butler said. “It gives us confidence we can beat them. But ... in the playoffs, like Thibs said, we can’t go around them; you’re going to have to go through them.”

Dwyane Wade scored 25 for Miami, but with James struggling again, the Heat dropped their third straight to match their longest losing streak of the season.

James scored 17 points on 8-of-23 shooting and couldn’t come through after Miami blew a 12-point lead down the stretch. With a chance to win it at the end of regulation, he got stripped by Butler on a layup attempt.

In overtime, it was all Bulls.

Chicago outscored Miami, 9-2, starting with Augustin’s 3 just under a minute in. Butler added a jumper from the wing, Noah scored on a putback and Butler hit two free throws to make it 95-86 with 1:33 left before James made a layup.

Wade tried to carry the load for Miami, particularly in the early going. Chris Bosh scored 15, but James had another rough afternoon. The four-time MVP is 23 for 59 in the three games since his career-high and franchise-record 61-point effort against Charlotte last week.

James also went without a mask from the start to protect his broken nose, after ditching it during the previous game.

He said it was simply uncomfortable, so he decided to play without it even though he was not cleared to do so.