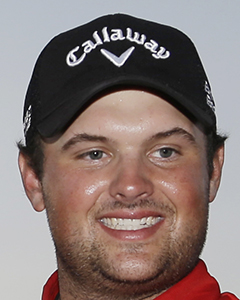 Patrick Reed built a big lead on the front nine and held on for a one-stroke win at the Cadillac Championship on Sunday, showing off a great short game when the pressure was building. With a two-shot lead, the 23-year-old American wisely played the final hole at Doral conservatively. He two-putted for bogey and closed with an even-par 72 for a one-shot win over Bubba Watson and Jamie Donaldson of Wales.

Reed became the youngest winner of a World Golf Championship, his third win in his last 14 tournaments.

Tiger Woods, only three shots behind going into the final round in his best chance this year to win a tournament, said his back flared up after a shot out of the bunker on the sixth hole. He failed to make a birdie in the final round for the first time in his PGA Tour career. His 78 was his worst Sunday score ever.

Reed is expected to go to No. 20 in the world rankings. In his own rankings, he feels he belongs much higher. He cited an amateur career that includes going 6-0 in matches to lead Augusta State to two collegiate titles, followed by three PGA Tour wins in seven months.

“I don’t see a lot of guys that have done that besides Tiger Woods and the legends of the game,” Reed said. “I believe in myself, especially with how hard I’ve worked. I’m one of the top five players in the world. I feel like I’ve proven myself.”

Reed has had a share of the lead going into the final round of all three of his victories - the Wyndham Championship in August, the Humana Challenge in January and a World Golf Championship at Doral that featured the strongest field so far this year.

Woods’ performances are less than encouraging heading toward the Masters. He has played only four tournaments: missing the 54-hole cut at Torrey Pines, tying for 41st in Dubai, withdrawing after 13 holes in the final round of the Honda Classic last week, and then fading badly on Sunday.