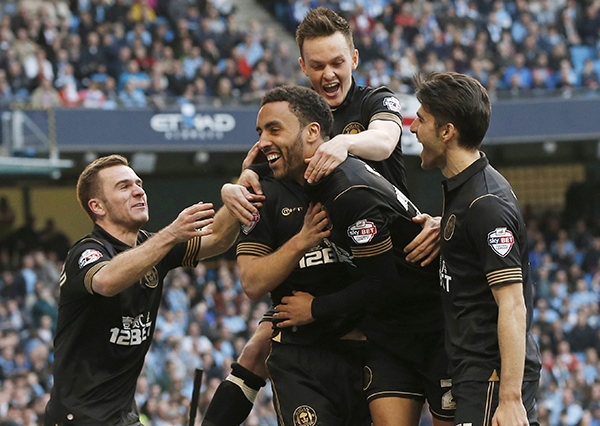 Wigan Athletic’s James Perch, center, celebrates with his teammates after scoring against Manchester City during their English FA Cup quarterfinal match at Etihad Stadium in Manchester, England, on Sunday. [REUTERS/NEWS1]

FA Cup holders Wigan Athletic proved Manchester City’s nemesis for the second time in less than a year on Sunday with a shocking 2-1 quarterfinal victory over Manuel Pellegrini’s talent-laden side.

Second-tier Wigan, which upset City, 1-0, in the final at Wembley in May to secure the Cup for the first time, went ahead through Jordi Gomez and James Perch before holding off a rousing City response to set up a semifinal against Arsenal.

They were joined in the last four by Sheffield United and Hull City after the third-tier Blades upset Championship (second tier) side Charlton Athletic, 2-0.

Arsenal had already booked its place in the last four with a 4-1 win over Everton on Saturday.

City secured the English League Cup last Sunday in what fans hoped would be the first leg of an unprecedented quadruple.

Fourth in the Premier League, and needing to overturn a two-goal deficit at Barcelona in the second leg of their Champions League last-16 tie on Wednesday, City was a strong favorite to negotiate the visit of Wigan.

But the Championship side, managed by former City striker and terrace hero Uwe Rosler, executed a perfect game plan and capitalized on a tired City display to go 2-0 up after 46 minutes.

“The only chance we had of doing the same here [beating City again],” Rosler told BT Sport, “was to keep the ball. You have to get the ball down. ... It is high risk, but our back five, and the midfield, were very good.

“I talked [to the players] about bravery as well. We had Lady Luck on our side, but overall we are delighted.”

City defender Martin Demichelis, under the spotlight after recent poor performances, gave away the penalty that allowed Wigan to take the lead in the 27th minute.

The Argentine fell for a fake by Marc-Antoine Fortune at the byline, tripped the French striker in his desperation to make amends and Gomez stroked home the spot-kick.

City was stunned again two minutes after the break, when James McArthur was given time and space to cross and Perch embarrassed a sleepy Gael Clichy at the far post to bundle over the line from two meters.

It took 63 minutes for the home side to seriously threaten the visitors’ goal when substitute striker Edin Dzeko headed against a post.

They made their breakthrough four minutes later.

Dzeko used his aerial strength to meet a corner, Micah Richards laid off to Samir Nasri and, from 20 meters (65 feet) the Frenchman drilled a left-foot half-volley through a crowd of players - including Joleon Lescott standing in an offside position - and into the bottom corner of the Wigan net.

“I felt their goal was offside,” Rosler said. “Lescott was interfering with [the line of sight of] our goalkeeper.”