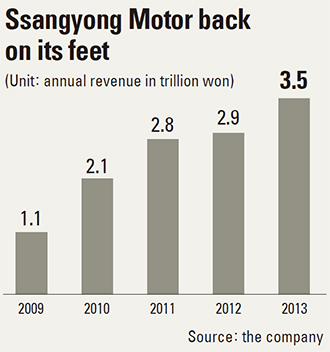 The 26-year-old Ssangyong Motor brand may come to an end in a couple of years as the company plans to adopt a new name to help it expand further in the global marketplace.

According to Ssangyong officials, a lot of progress has been made on changing the name since it was first mentioned by CEO Lee Yoo-il in October while introducing Ssangyong Motor’s new Korando C to the European market.

“The purpose of changing the brand is to renew our public image,” said an official at the automaker.

The company has seen frequent ownership changes in its 60-year history as well as a severe credit crunch that led to court receivership and violent union-management clashes. The company said employees were the first to demand changing the company’s name.

“The other reason is to boost exports,” the official added. “The current brand is not easy to pronounce for consumers outside of Korea.”

The “yong” in Ssangyong, which is the Chinese character for dragon, could cause consumers to think it is a Chinese automaker.

The official said the decision to change the name has been approved by its largest shareholder, Mahindra & Mahindra.

The details on the name or the design as well as even the release date haven’t been finalized yet. The official said it will first talk with the company’s union representatives as well as hold a public hearing on the changes before the final decisions will be made. A new brand could be used as early as 2016, according to the company’s officials.

Although the automaker was founded in 1954 under the name Ha Dong-Hwan Motor Workshop, after many mergers and acquisitions, the automaker finally settled on Ssangyong in 1988.

The changing of the brand name is crucial to the automaker’s aggressive expansion, which started to gain momentum in recent years after the infamous struggles it underwent starting with the financial crisis in Asia in the late 1990s.

Ssangyong was temporarily under the ownership of Chinese auto giant Shanghai Automotive from 2004-9.

Although rolling out competitive SUVs such as the Rexton under Shanghai Automotive, the global crisis in 2008 heavily affected the automaker’s performance because most of its vehicles were gas guzzlers.

During this time, Shanghai Automotive pulled out and was criticized for stealing the Korean automaker’s SUV development technologies without fulfilling the promises it made when it first bought a major share. With management only getting worse, Ssangyong Motor applied for court receivership in 2009 that led to laying off 37 percent of its work force, or more than 2,600 employees and one of the longest strikes in Korean history.

Mahindra & Mahindra, the Indian auto giant, became a majority stakeholder of the Korean automaker in 2011.

Since then, the situation has turned around favorably for Korea’s fourth-largest automaker. Other than its luxury Chairman sedan, the majority of Ssangyong Motor’s models are SUVs. In the past four years, the company’s revenue has continuously grown thanks to the unveiling of new vehicles like the Korando Turismo, released in February 2012, and the New Korando C, released in August. Sales in Russia, China and other major export markets started to pick up as well.

This helped the automaker report its best performance since the company was founded six decades ago. Ssangyong Motor’s revenue was 3.5 trillion won ($3.3 billion) last year after selling more than 145,000 vehicles. This represents a 20 percent increase compared to 2012. While nearly 64,000 vehicles were sold in the local market, Ssangyong sold nearly 82,000 overseas.

And the momentum continues. Last month, Ssangyong Motor sold more than 5,500 units, up 27 percent year-on-year. This is the sharpest growth among the five Korean automakers - Hyundai Motor, Kia Motors, GM Korea, Ssangyong Motor and Renault Samsung. Ssangyong Motor currently ranks second to last with a market share of 5.1 percent. Its sales targets for this year is 69,000 units in the domestic market and 91,000 units abroad. While attending the Geneva Motor Show, the company’s CEO said the automaker hopes to increase its brand competitiveness and market shares overseas with its distinguished lineup in SUVs.