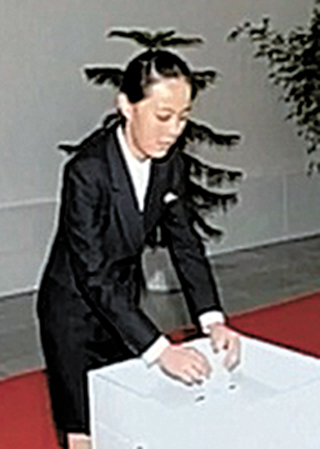 Kim Yo-jong, the only sister of North Korean leader Kim Jong-un, casts her vote in the regime’s rubber-stamp parliamentary elections on Sunday in Pyongyang. Screen capture from KCTV

Kim Yo-jong, the only sister of North Korean leader Kim Jong-un, made her first public appearance yesterday on state television, emerging as a powerful royal family member after the brutal death of her uncle Jang Song-thaek.

The 27-year-old Kim made her political debut by accompanying her brother, Kim Jong-un, along with other high-ranking officials, including Choe Ryong-hae, the director of the General Political Bureau of the North Korean Army, who is known as the closest aide to the leader. In a still shot, they were seen heading to a polling station yesterday at Kim Il Sung Political University in Pyongyang for the regime’s rubber-stamp parliamentary elections.

In a black two-piece suit, she was mentioned by the regime’s official Korean Central Television (KCTV) along with two other vice-ministerial-level officials, Kim Kyong-ok, the first deputy director of the ruling party’s Organization and Guidance Department, and Hwang Pyong-so, a deputy director of the same department.

KCTV called them “core workers of the party’s Central Committee,” without mentioning her official title.

So far, Kim had just been spotted during public occasions with other officials, not officially introduced by the state media.

“She was born in 1987,” Kim Eui-do, spokesman of the ministry, said at a briefing. “But we can’t tell you her profile, as she has not officially dealt in public affairs yet.”

In the Kim dynasty’s family tree, she was born between late leader Kim Jong-il and his third wife, Ko Yong-hui. Kim Jong-un is the second child between them, following his elder brother Jong-chol.

South Korean analysts say Kim Yo-jong is known to have studied in Switzerland in the late 1990s with her brother, Jong-un.

At yesterday’s elections, a series of high-profile officials showed up to vote. Since the death of the leader’s powerful uncle, Jang Song-thaek, there has been relatively little shake-up in the regime.

Notably, Kim Yang-gon, the director of the United Front Department of the ruling party, also appeared at the elections. Known as a dove in inter-Korean affairs and a close aide to Jang, he was rumored at one point to have been purged.

Still, Jang’s wife and the aunt of the Communist state’s leader, Kim Kyong-hui, did not appear in media reports. She has not made a public appearance since the swift execution of her husband in December 2013.

Speculation has risen among South Korean analysts that Kim Yo-jong might fill the power vacuum left by their uncle and aunt, who were once regarded as Kim Jong-un’s guardians.

Kim Kyong-hui began her political career in 1976 at 30 as a deputy director of the ruling party’s International Department. Her brother, Kim Jong-il, was regarded as an heir-apparent under their father, Kim Il Sung.

After yesterday’s elections, North Korea announced that leader Kim Jong-un was elected as a representative of the 111th Mount Paektu constituency with “100 percent support from voters in the region.”