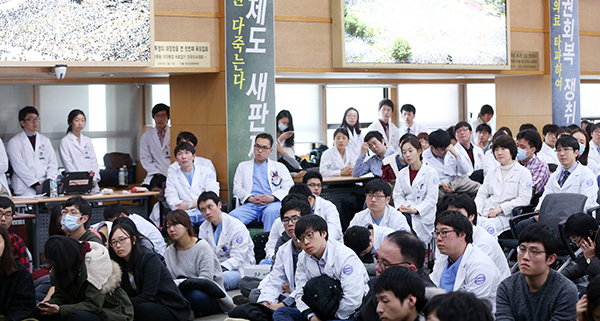 Residents gather in the auditorium of the Korean Medical Association Hall in Yongsan, central Seoul, yesterday, after doctors collectively refused to work. [NEWS1]

Less than a third of local clinics, a smaller portion than expected, joined the collective one-day strike yesterday against the government’s plan to further commercialize the medical sector, according to statistics from the Ministry of Health and Welfare.

Among the top five general hospitals, including Samsung Medical Center, Seoul National University Hospital and Asan Medical Center, only Severance Hospital, which is affiliated with Yonsei University, saw 200 medical residents out of 500 at the Shinchon branch in western Seoul join the collective protest.

The collective action, however, did not affect the hospitals’ operation, nor did it lead to a failure to properly treat incoming patients.

Led by the Korean Medical Association, the one-day strike aims to persuade the government to withdraw its plans to adopt remote medical services via telecommunication devices and to allow medical institutes to set up for-profit subsidiaries that will serve auxiliary functions, such as research and development and medical-tourism facilities.

The association considers setting up such subsidies a step toward the establishment of for-profit hospitals despite the government’s repeated denials that the policies are meant to deregulate medical services and boost investment in the sector.

To avoid a worst-case scenario in which the majority of doctors would join the strike, the Health Ministry took an emergency measure, mandating 80 percent of all the 254 health centers run by local governments to extend their operating hours by two hours until 10 p.m. Within Seoul, 25 health centers will extend their hours.

“I think it is very regrettable that there is a group move that opposes the policies of the government that is trying to push ahead with changes and reforms to enhance the quality of citizens’ lives and raise national competitiveness,” President Park Geun-hye said yesterday in a meeting with senior presidential secretaries. “Such behavior will deal a huge blow to the national economy and have a malignant impact on national development.” She pledged to “take stern measures against them.”

The Welfare Ministry said it is currently identifying the clinics that joined the strike and will order them to resume operations. Should they refuse orders and continue their shutdown, the government has the legal authority to punish them.

The association made public earlier that it would hold its second walkout from March 24 until March 29.