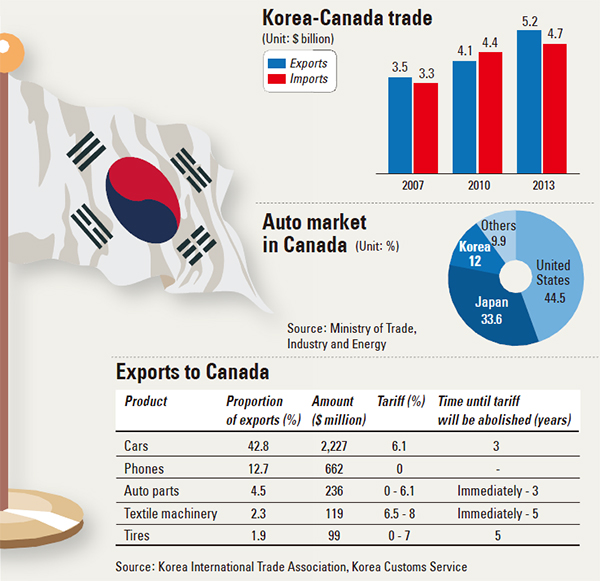 The industries that will benefit most from the bilateral trade agreement signed between Korea and China yesterday are automobiles and textiles.

With Canada joining the club, trade with economies that have free trade agreements with Korea now account for more than 60 percent of the country’s total trade, although China remains its largest trading partner. A free trade agreement with China is being negotiated.

Korea and Canada yesterday agreed to complete lift tariffs on 97.5 percent of imported products, or about 98.6 percent of total imports in dollar terms. It is a stronger trade agreement than the one with the United States.

The lifting of tariffs will take place as early as next year after ratification passes the National Assembly and the Canadian legislature.

Automobiles play a significant role in Korea’s exports to the North American country. They account for 42.8 percent of all exported goods. Roughly 133,000 units worth $2.2 billion are shipped to Canada from Korea ever year.

Currently Canada imposes a 6.1 percent tariff on Korean-made cars. Under the agreement, the tariff will be phased out by 2016. 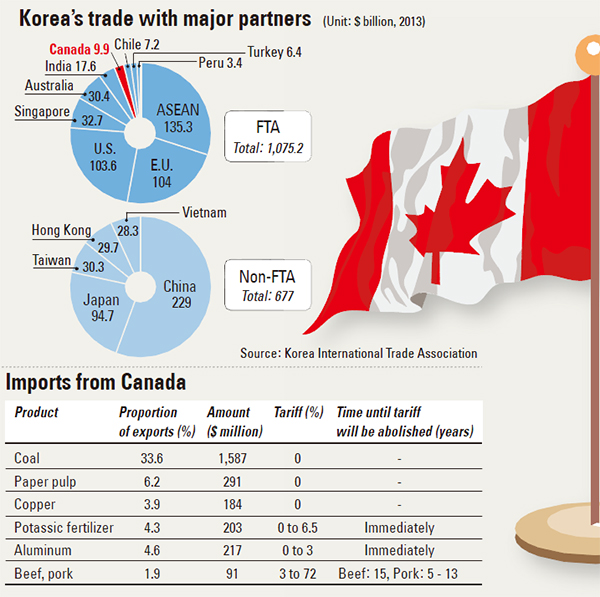 Korean cars accounted for only 12 percent of total market share in Canada last year. The United States has the largest share, 44.5 percent, and Japan comes in second with 33.6 percent.

Japan has factories in Canada, which exempts the country from paying tariffs on many models. Most cars manufactured in the United States and Mexico are exempted from tariffs thanks to the North American free trade agreement.

Hyundai and Kia, the country’s two largest automakers, will be the biggest beneficiaries of the deal.

The two automakers last year exported about 120,000 units to Canada, according to the companies. From their U.S. plants, the Korean auto giants also shipped 93,000 units during the same period. The companies declined to make official comments on the impact of the FTA.

Another big beneficiary could be the textile industry. Canada has imposed tariffs of 5.9 to 18 percent on Korean textiles. With the deal, those tariffs will be cleared in the next three years. But the industry didn’t show much excitement over the news because Canada hasn’t been a significant market to date.

“We don’t really expect a dramatic change in our industry,” said Joo Sung-ho from Korea Federation of Textile Industries. “Canada mainly imports our knitted fabric composites, but its tariff was already low. Also, in terms of overall raw fabric, Canada is not even counted in our top 30 export partners. So, this FTA doesn’t really give us a positive impact.

“Instead of raw textiles, we are pinning our hopes in exporting finished clothes. Canada, which massively imports clothes from Central and South America and Vietnam, has imposed a flat 18 percent tariff, according to the World Trade Organization standard. So, if Korean products become cheaper through this FTA, I’m pretty sure Canadians will like the quality of made-in-Korea clothes.”

“Korean economic and industry circles were waiting for the trade authority to reach the agreement because it is really important to concentrate on the Canadian market, which hasn’t to date been taken over by our competitors, Japan and China,” the KITA said in a statement released after the Blue House made the announcement earlier yesterday.

But not all industries liked the deal. The government announced the two countries agreed to start eliminating tariffs on beef and pork. Currently, Canadian beef has a 40 percent import tariff and pork is imported with tariffs of between 22.5 percent to 25 percent. Tariffs on beef will be eliminated in 15 years, and on pork in five to 13 years.

“As Canada enters the Korean market, competition in the imported beef market is going to be slightly fiercer,” said a researcher at the Korea Rural Economic Institute. “But it won’t be easy for Canada to take over the market due to remaining fears of mad cow disease among local consumers.”

“Of course, the immediate tariff reductions will impact us,” said Kim Kwang-cheon of the Korean Advanced Farmers’ Federation. “As tariff reductions continue through FTAs with the United States, Australia and Canada, our farmers will face even grimier futures.”