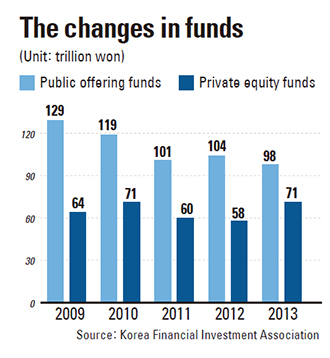 Public-offering funds have been losing their appeal in recent years, in contrast to the rising popularity of private equity funds.

The trend has been building since the global financial crisis of late 2008. Prior to the worldwide economic downfall that started with the collapse of Lehman Brothers, Korean retail investors flocked to public-offering funds. In 2007, the funds grew 52 percent to 153 trillion won, and returns were so high that some posted yields of 40 percent.

But, in 2008, the amount invested in public-offering funds plummeted to 96 trillion won.

Last year, 6 trillion won was withdrawn from public-offering funds, and the trend has become even more vivid as the primary stock market has failed to generate upward momentum.

The benchmark Kospi index has languished below 2,000 since the beginning of the year, and the Seoul main bourse has been stuck between 1,880 and 1,970. Its highest close this year was 1,979.99 on Feb. 28. Meanwhile, the Bank of Korea has kept its key borrowing rate at 2.75 percent since May. The central bank’s monetary policy committee will meet Thursday.

With the policy rate remaining low, interest rates on new bank deposits have remained below 3 percent. In January, they fell 0.02 percentage point to 2.65 percent. The interest rate on existing loans in January was 2.17 percent, down from 2.19 percent in December.

In search of higher yields during a period of low interest and low growth, investors have been attracted to private equity funds. Last year, 13 trillion won was put into the funds. 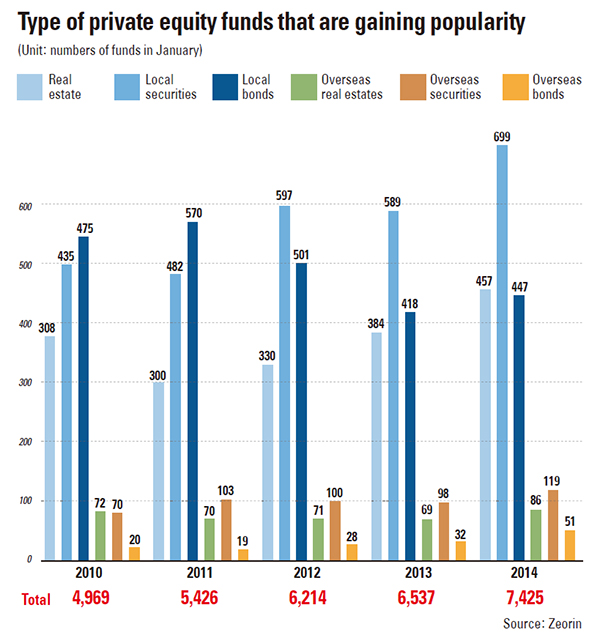 Mirroring investments, the number of private equity funds skyrocketed to more than 7,400 in January. That is a 12 percent increase compared to 2013 and 30 percent more than five years ago.

Although public-offering funds have a larger total value, private equity funds have a smaller list of regulations.

The interest in private equity funds is expected to only increase since the government announced further deregulation of the market earlier this month.

This includes lower barriers on acquiring start-ups as well as allowing initial public offerings for companies whose majority stakeholders are private equity funds.

The government’s aim is to expand the M&A market from 40 trillion won to 70 trillion won by 2017 by encouraging the participation of private equity funds.

This year, the value of private equity funds is likely to expand further with Woori Bank, Daewoo Shipbuilding and Marine Engineering, Tongyang Cement and STX Pan Ocean, among others, up for sale. Private equity funds from home and abroad, including KKR and Carlyle, which recently bought ADT Caps, Korea’s largest private equity fund MBK Partners and Vogo Fund are said to have an interest in the numerous M&As.