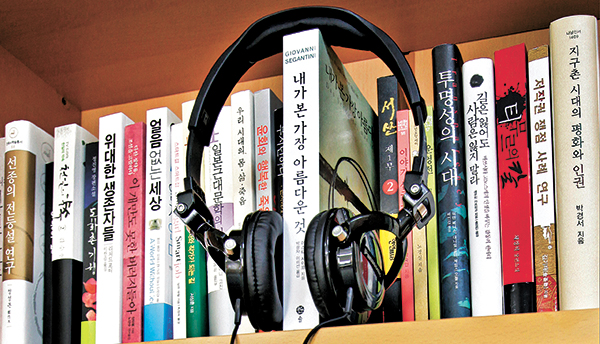 Once or twice a month, freelance photographer Shin Seok-chul downloads podcast episodes of “Buknam Buknyeo,” a program about books, after noticing it on the “most popular podcast” category a couple of months ago. He listens to the episodes on his smartphone whenever he has free time.

“It is fun to listen to hosts talk about books that I have read before, or ones I have been planning on reading because at least two or three people share what they have felt about the books, and I get to see how others interpret the literary works while I have felt differently,” said Shin, who calls himself a voracious book reader. “Podcasts seem more interactive than other book reviews in newspapers or on TV programs. I continue to download episodes for my free time.”

To attract readers like Shin, who prefers to find his amusements through mobile devices, the publishing industry in Korea has been tapping new ways to approach its readers - including podcasts. Each month, more podcasts about books are being posted and downloaded, with some programs drawing millions of downloads.

The concept has been tried before, but only on a small scale. Many individuals have previously posted their own book reviews, but failed to draw much of an audience. However, some big-name writers, critics and publishing houses have gotten in on the act recently and their efforts are making a much bigger wave in Korea’s literary world.

Wisdom House introduced the concept of packaging its books along with reviews in 2012. Other publishing houses, including the Munhakdongne Publishing Corporation, have established similar channels. Munhakdongne’s is called Channel 1.

“As fewer people are drawn into literary works from existing media outlets including newspapers to get information about new book releases, publishing houses have naturally been looking to find a new way to continue communicating with readers,” said Kim Eun-joo, who directs Wisdom House’s podcast, which is called “Red Bookstore,” or “Bbalgan Chaekbang” in Korean. She said the podcast has been downloaded about 16 million times since its launch in 2012.

“We have heard that podcasts on books draw attention, while other contents on the same channel do not seem to be widely received by individuals, except those related to politics or religion.”

A local bookstore also has decided to use podcasts to stay connected with readers. Kyobo Bookstore, one of the nation’s largest book sellers, launched a new podcast channel called “Romance Book Shop,” or “Nangman Seojeom” in Korean, last month.

“Because we are a bookstore and not a publishing house, we have more leeway to introduce a variety of books,” said Huh Kyun, director of Kyobo’s contents business team, adding that publishing houses may be unsure about whether to introduce just their own books or include others to gain more readers.

“We wanted to show that a bookstore can become more than a commercial area where books are sold, just like a gathering place where literary ideas are shared.” 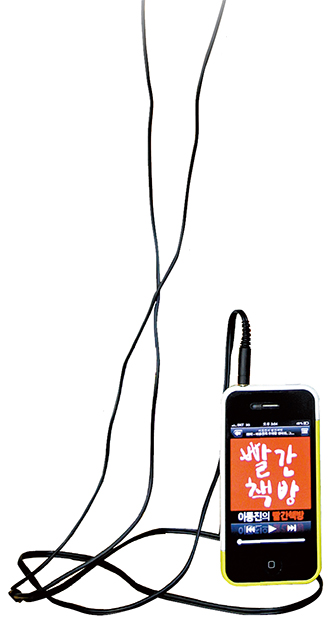 What makes a podcast?

Many podcasts have either one or two hosts. Single hosts usually provide a quieter atmosphere with a more thorough analysis of the books, while those with two or more hosts are more lively when sharing different perspectives on the same book.

“Many go with two or more hosts as the chemistry coming from literary experts’ conversations are more entertaining,” said Heo Yun-jyung of Wisdom House, who helped launch the podcast “Red Bookstore,” which features movie critic Lee Dong-jin as the host and novelist Kim Jung-hyuk as a regular guest. “No one would have thought that some long conversations on books between two men could be this much fun.”

Most of the time, there is no script. The hosts meet with a production team at a recording studio and talk for about five hours. The audio is rarely edited to keep the flow of the conversation more natural.

There are no restrictions on the length of each episode. Some recordings take three hours, while others take about two hours, depending on how much the hosts are willing to talk about. Sometimes the hosts blend their knowledge and previous experiences to make their reviews more interesting. It’s not uncommon for some hosts to talk about the designs of book covers.

Although talks just between hosts can be entertaining, publishing companies diversify their programs by inviting authors and musicians who have writing experience. Singer Lee Juk of Panic, who has written three books, was a guest for Wisdom House while many other authors, including novelist Kim Yeon-su, came on Kyobo’s program.

Munhakdongne even had Japanese author Hirano Keiichiro on its program. Hirano, who had visited Korea several times and has a fan base here, came on the program to reach readers who couldn’t attend his readings or other events during his visits.

“There were many talks about how we were going to have his message translated on our program, but we decided to keep all his words in Japanese and then the Korean translator said what the author just stated,” a Munhakdongne official said.

More programs mean more choices for listeners. While Munhakdongne’s program focuses more on talking in depth about literature with one host, others are using multiple hosts to create lively conversations.

“There may be some audiences who would say our program is boring, but that is the forte we have because we have established our own audience group who appreciates our style,” the Munhakdongne official said.

Because there is no set schedule for uploading the podcasts, new recordings are released when it is convenient. However, some of the more popular programs have established weekly releases, usually on the same day each week. Kyobo Bookstore updates its podcasts on Tuesdays while Wisdom House does theirs on Wednesdays.

Book publishers are striving to find new ways to connect books and authors with readers because statistics show that Koreans are reading less than ever before.

According to a survey from the Ministry of Culture, Tourism and Sports, adults in Korea read 9.9 books a year in 2011, down from 12.1 books in 2007. They also spend less time reading books, about 26 minutes on weekdays in 2011, a decline of 6.1 minutes from 2010. On weekends, when they may have more time on their hands, they still only read for less than 30 minutes.

Another survey by the ministry explains why people still don’t read books even when they have time. More than 33 percent of 5,000 adults said that they just don’t like reading and it has not become one of their habitual behaviors. 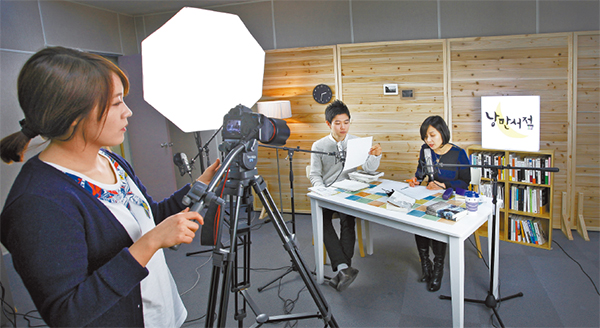 Reading with their ears

It might seem odd that the same people who have strayed away from reading in recent years are showing an interest in podcasts about books. But Lee Dong-jin of “Red Bookstore” said people like to hear books being read aloud.

“Reading with your eyes is the usual pattern of reading, and reading quietly has become more widespread in modern times,” said Lee, adding that people used to read books out loud so that others could hear. “Podcasts are similar to reading books out loud, so it’s not that people [listening to podcasts] have some particular and new interest, but it is just a new technology grafted on to some long-existing reading habits.”

Lee doesn’t have a script to check whether he is missing anything he thought he would want to say, adding that, “I tend to speak the ideas that just come into my head at that moment of recording.”

What makes Lee’s program much more fun is that he encompasses different genres of entertainment, as he reviews movies for a living and has been a music program DJ on the radio. He has also written nine books. To attract listeners, he talks about how certain books remind him of movies that he previously watched, and how the covers of books made him think of musicians. Such talk draws in not only book lovers but also people who love his style of criticism.

Now that people have access to many things through their mobile devices, writers are finding it difficult to reach out to their audience in person. So some of them are finding ways to use those devices to connect with readers who might provide them with some inspiration for future material.

“To be able to talk about certain books for a long time for audiences who may listen to this right after the upload, or a couple months later, I have started to read books more thoroughly, even when I have already read them before,” said Jeong Yi-hyun, a host on Kyobo’s podcast. She said she doesn’t care about competing eith other programs because podcasts are different from other radio shows fighting over winning more audiences.

“We just talk about books that we think are meaningful and worth talking about, and we just make conversations about things we like.”

Podcasts are also a great way for newcomers to spread their names. Literary critic Heo Hee, who debuted in 2012, is one of many who hopes to make greater contact with readers in the changing literary scene in the next few decades. The publishing industry estimates that most of the people who download and listen to podcasts are in their 20s and 30s.

“For me, it is a great way to let the wider public know more about my point of view on books and ideas, because I wouldn’t be able to approach a big number of undesignated people through any event because I just started my career in the industry,” said Heo.

As many big-name publishing houses and local bookstores are inviting new readers to the electronic literary world, many are considering including videos on their podcasts so readers can see the faces of the hosts and guests on their favorite programs.

Munhakdongne and Kyobo also record each episode on film.

“We make videos so that we can make an archive, which can later be combined with new visual programs we may make in the future,” said director Choi Jong-soo of Munhakdongne, adding that the publishing house is preparing to set up Munhak TV, a temporary name for the program with visual and audio.