Tigers looking to return to glory

Tigers looking to return to glory 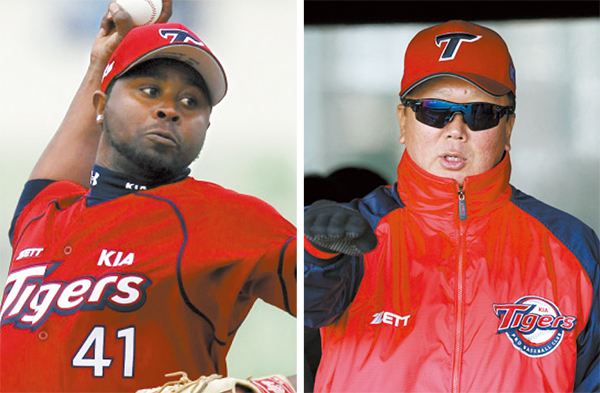 After the craziest hot stove season in the history of the Korea Baseball Organization, in which the league’s nine teams spent a record 53.2 billion won ($49.6 million), the clubs are now in the middle of the preseason, testing their new lineups. The Pickoffs looks at the year ahead for the Kia Tigers and makes some projections.

Manager Sun Dong-yeol will be tested

Since winning their 10th KBO title in 2009, the Kia Tigers have struggled. Over the past two or three offeasons, the Gwangju-based Tigers have been big spenders, but with mixed results.

On paper, the team looked solid. With all-star center fielder Lee Yong-kyu, whose nickname is “on-base machine,” slugger Kim Sang-hyun and Na Ji-wan, who hit a walk-off three-run home run in Game 7 of the 2009 Korean Series that won the Tigers their 10th KBO title, the Tigers’ outfield was considered the league’s best.

The team also looked like they had decent infielders and pitchers. Former Major League Baseball player first baseman Choi Hee-seop was expected to hit more than 30 home runs last year, just like he did in the 2009 season, and shortstop Kim Sun-bin has been an all star in the league.

Third baseman Lee Bum-ho was signed in the 2011 offseason, after he failed to adapt to the Nippon Professional League, to a one-year, 1.2-billion-won deal.

Their pitching was also considered among the league’s best. Right-handed starter Yoon Suk-min was tops in the KBO. Lefty Yang Hyun-jong, who went 12-5 with a 3.15 ERA in 2009, was a rising star. And side-arm right-hander Yoo Dong-hoon was one of the league’s best closers, with 22 saves and a 0.53 ERA in the 2009 season.

All told, most analysts thought the Tigers would be major contenders, along with the Samsung Lions.

But the team was hit by repeated misfortunes over the last four seasons. Third baseman Lee, who was expected to be bat in the middle of the lineup, played just 42 games in the 2012 season due to injuries and then didn’t improve in 2013, hitting only .248 over 122 games.

Kim Joo-chan, an all-star outfield the Tigers signed in the 2013 offseason to a four-year, 5 billion won deal, missed two-thirds of the season because of a wrist injury.

Yoo started to struggle as a closer. His ERA zoomed from 2.53 in 2009 to 5.29 in 2012, so the Tigers pulled him from that role, forcing most of their other pitchers to try to close, including ace Yoon and the foreign starter Anthony Lerew. Yoon complained that the team changed his roles too often and he missed many games due to injuries. Lerew wasn’t very good in that role either, with 22 saves last season but an ERA of 4.50.

Meanwhile, the team’s mound completely fell apart. The 2013 ERA was 5.12, the second worst after the Eagles’ 5.31, and they finished the season in eighth place out of nine teams.

Since the team’s biggest pitching weakness was their closer, the Tigers signed 30-year-old Jairo Asencio of the Dominican Republic this offseason. He has pitched as a reliever in 313 games, including 43 MLB games. In the triple-A leagues, he racked up 86 saves. The Tigers said Asencio can throw a fastball as fast as 150 kilometers (94 miles) per hour, with above-average changeups. He retired three Samsung Lions’ hitters in the top of the eighth in Sunday’s preseason game with that combination. With Yoon gone, now with the MLB’s Baltimore Orioles, the Tigers don’t have any alternatives, and if Asencio struggles, another disaster could loom.

The Tigers expect 35-year-old D.J. Houlton, who in more than six years in the Nippon League had a combined-record of 63-39, with an ERA of 3.11 and six saves, to be their new ace.

One bit of good news is that lefty starter Yang’s pitching has been improved since the second half of the last season. In an exhibition game against Japan’s Nippon-Ham Fighters, he threw four scoreless innings while striking out three and showing off a 150-kilometer-per-hour fastball and a sharp slider. If two other right-handed starters, Song Eun-beom and Kim Jin-woo, can avoid injuries, their starting rotation might be one of the best.

In offense, they lost Lee Yong-kyu, the league’s best leadoff hitter, to the Eagles during the offseason, but the impact might not be that serious because of the signing of Kim Joo-chan, who averaged .301 over the past six seasons, and because Shin Jong-gil could be about to take a step up after a break-out season last year when he hit .310, with 117 hits and 29 steals over 104 games.

The biggest question mark with the team’s batting is their new import, Brett Pill of the United States. The 30-year-old, who averaged .285 and hit 113 home runs over eight minor league seasons, is expected to bat in the middle of the lineup. But he didn’t impress manager Sun and fans when he went hitless in the preseason opener last week. Analysts say he needs more time to adapt to the league, but as the Tigers are looking to advance to the postseason, they won’t wait for him more than a month or two.

In the 2012 hot stove season, the Tigers fired manager Cho Bum-hyun and signed a three-year deal with Sun Dong-yeol, the former manager of the Lions who won KBO titles in 2005 and 2006. The team expected Sun, who had been a star for the Tigers in the 1980s and ’90s, to take the team to the postseason, but so far he has failed. As the Tigers did not extend his contract during the offseason, the team could be looking to make a big change at the end of the season - or earlier - if things don’t work out.

Some blame Sun’s leadership and management skills for why so many players have struggled over the past two seasons. There is speculation that the reason their star center fielder Lee left and signed with the Eagles after the free agent market opened was because he didn’t want to play for Sun.

But, considering the Tigers could have their best lineup in years, they should be one of the four teams to compete in the postseason.