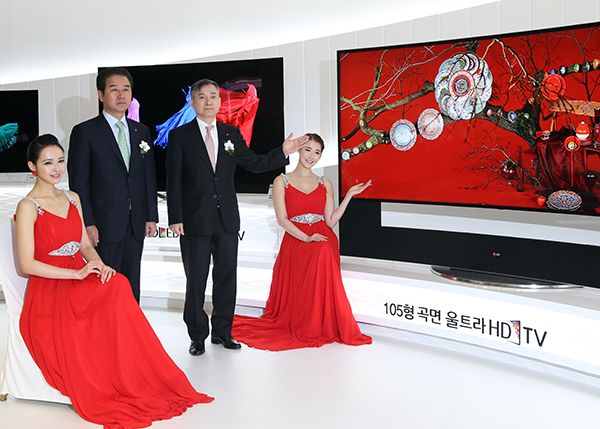 “Along with the difficult situation worldwide, Chinese companies are copying technology and offering powerful pricing,” Ha said. “Japanese companies are also preparing for another plunge into the electronics market.

“In response, LG Electronics focuses mostly on introducing a differentiated product with high-end technology and quality,” he said.

The 49-inch UHD TV is likely to be priced around 2 million won ($1,900), and the 55-inch will be around 3 million won. The CEO said that although price is an important factor, he believes the quality of the product should be the top priority.

In particular, Ha expects to widen consumer options by launching the premium TVs and low-end products at the same time.

“Although there are cheap UHD TVs launched by Chinese companies, we would not call their products real UHD TVs as the quality is low and the technology is still far behind,” said Lee In-kyu, head of LG Electronics’ TV business division.

“It is difficult to popularize the products without 40-inch models, as a lot of consumers still prefer 40-inch TVs. They can still feel the full picture quality of UHD with the 49-inch TV, as the technology of LG Display is outstanding,” said Lee.

“We will grow more than the market with the launching of various large UHD TVs, including the 65-inch,’’ Ha added.

The CEO also said he hopes to narrow the gap in global market share.

“We regret we were little bit late in launching the 55-inch and 65-inch products, after launching the 84-inch UHD TV in 2012 for the first time in the world. Currently, we have a gap with the competitor, but as the UHD TV market itself is still small, we do not think the current market share matters too much. We are planning on catching up as quickly as possible,” said Ha.

Meanwhile, LG also emphasized it will gear up efforts to spread content for sustainable growth of the UHD TV market.

LG Electronics is set to earmark funds for creating UHD content in cooperation with the Ministry of Science, ICT and Future Planning and home shopping businesses.

Through close cooperation with the country’s cable TV industry, it plans to implement applications in its UHD TV that would allow users to watch UMAX, the world’s first UHD broadcast, without a separate set top box.

In addition, it plans to provide different kinds of content that viewers can enjoy through alliances with global providers such as Fox and Netflix.