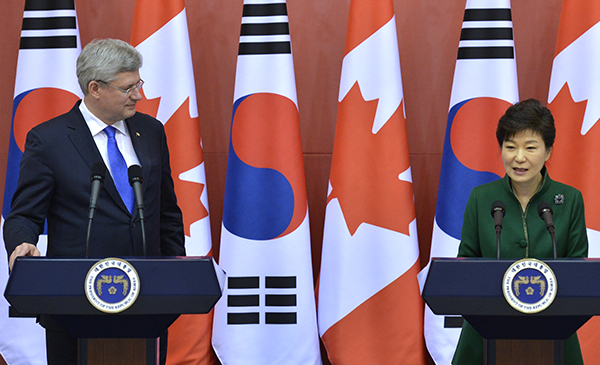 Korea and Canada yesterday concluded a free trade agreement, nine years after negotiations began, that is expected to boost Korea’s exports of automobiles and textile goods and Canada’s exports of beef and other natural resources.

The agreement makes Korea the first country in the Asia-Pacific region to have such an agreement with Canada, the world’s 11th-largest economy and a member of the Group of Eight, according to the Ministry of Trade, Industry and Energy.

“Both Korea and Canada are old friends and are valued partners with complementary economic structures,” said President Park Geun-hye in a press conference at the Blue House following a summit with Canadian Prime Minister Stephen Harper.

“The conclusion of the free trade agreement is very meaningful,” she said, “in that it will form an institutional foundation to further expand reciprocal cooperation including trade and investment.”

“This agreement is a great deal for both of the countries,” said Harper. “It will create jobs and opportunities for Canadians today and, just as importantly, more generations to follow.”

Negotiations with Canada were the longest ever for an FTA by Korea. Initial talks began in July 2005, followed by 13 rounds through March 2008. Negotiations were halted in April 2009 after Canada challenged Korea’s ban on imports of Canadian beef six years earlier at the World Trade Organization. Korea instituted the ban in 2003 after an outbreak of bovine spongiform encephalopathy, commonly called mad cow disease.

Korea resumed Canadian beef imports in January 2012, and the trade talks resumed last November. Korea was the last major Asian market to lift its ban. Under the accord reached yesterday, Korea will reduce tariffs on Canadian beef over 15 years.

Canada will eliminate a 6.1 percent tariff on Korean automobiles within two years of the deal being ratified, compared to the five years in Korea’s FTA with the United States, which went into effect in 2012.

Korean automakers had a combined 12 percent share of the Canadian automobile market last year versus 34 percent for Japanese and 45 percent for Americans, and automobiles accounted for 42.8 percent of Korea’s exports to Canada in the same year.

Tariffs on textile machinery, a large export item from Korea, will be removed over five years. Within two years Canada will also remove most of its tariffs on clothing and textile products, which now stand at 18 percent at the maximum.

Canada chose Korea as the first Asian country to forge a trade pact with. Last year, the countries marked the 50th anniversary of diplomatic ties. Neither Japan nor China has a trade agreement yet with the North American country, and Canada hopes Korea will be a gateway to the Asia-Pacific region in the future.

“Today truly is a historic milestone for Canada,” said Harper. “This agreement marks Canada’s first trade agreement with a country in Asia-Pacific region.”

Harper added the agreement is “good news” for Canadian beef and pork producers, and for the wine, fish, seafood, medical and chemical sectors.

Harper arrived in Seoul on Monday with a delegation of politicians, businessmen and journalists, who also attended the conference yesterday.

“Canada has great potential as an export market for Korea given the small size currently,” said a Blue House official.