Is this the end of road for Park Ji-sung?

Is this the end of road for Park Ji-sung? 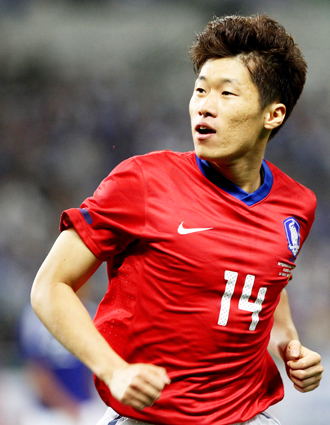 Fans might not have much time left to see Korean football icon Park Ji-sung, due to the poor condition of his right knee, which people have often called a “time bomb” that could detonate at anytime.

Park Sung-jong, father of the 32-year-old PSV Eindhoven midfielder, told Korean media earlier this year that his son planned to retire after the 2014-2015 season, but media outlets in the Netherlands reported on Tuesday that Park might quit earlier than expected because of his knee, which has sidelined him several times since he played with Manchester United from 2005-12.

Park has been in good shape since he returned to the field in late December after recovering from a left ankle injury that he sustained in October. Without Park, Eindhoven was winless (two draws and six losses) in eight league matches from Oct. 20 to Dec. 9.

The club was leading the league before Park’s injury but has since plunged to 10th place. With Park back on the field, the club won six matches in a row. He didn’t score many goals, but he has been the key player on the club, which consists of many players in their early 20s. Park has been successfully controlling the tempo of games and creating scoring chances in midfield areas.

In Sunday’s match against FC Utrecht, Park contributed to the team’s 1-0 victory and was later selected as one of the best 11 players for the 27th round Dutch league, although he neither scored nor assisted a goal in that match.

The club seemed to enjoy having Park on the field. In an interview with Dutch media De Telegraaf, PSV’s technical director, Marcel Brands, said that the club was willing to extend Park’s loan contract with England’s Queens Park Rangers but that it has two concerns. One is whether QPR will agree to the extension and the other is Park’s right knee.

Brands said that the most important concerns are Park’s physical condition and whether he can keep playing on the field.

In the beginning of the 2013-14 season, Dutch media outlets reported that his right knee, which has been operated on twice, is worse than ever. They said Tuesday that Park sometimes can’t get out of his bed in the morning after a match and feels uncomfortable walking by himself. They added that Park needs to take a full rest for a few days after a match before he can play again.

Since he began playing on European league teams such as Eindhoven (from 2002-5 and 2013) and Manchester United, one of the toughest things he has had to deal with has been managing the tight schedule between his club and the national team - and the long distance between their locations.

When Park had difficulty getting playing time, Korean fans got angry at United coach Alex Ferguson, but Ferguson used Park sparingly because he was worried about Park’s knee. Park recently said that 2007, the year he underwent his second surgery, was the scariest time in his career.

Controversy arose when Korean national football team coach Hong Myung-bo said he was considering adding Park to his 23-man roster for the Brazil World Cup, which begins in June.

However, Hong decided not to call up Park, telling Korean media in February that “his knee is much worse than we know.”

Under such circumstances, it looks like Park is seriously considering ending his football career.

Meanwhile, Eindhoven is waiting for Park to make a decision before it officially offers to extend his loan contract, which expires in August.