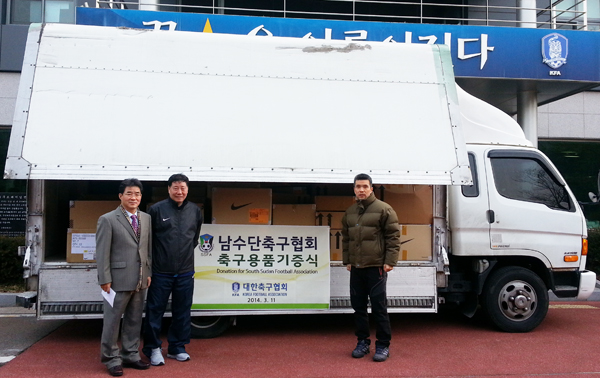 The Korea Football Association (KFA) said Tuesday it will provide about 200 million won ($187,775) in humanitarian aid to the South Sudan Football Association. The KFA will donate football gear, including training jerseys, uniforms and footballs, to the young country that is still suffering from a recent civil war.

The decision to reach out to South Sudan was suggested by KFA President Chung Mong-gyu, who was impressed by a January report from the JoongAng Ilbo on Lim Heung-se, the Korean coach of the South Sudanese national football team. Since then, Chung has been looking for a way to help football players in the country. He spoke with Executive Director Ahn Ki-heon and Vice President Huh Jung-moo before meeting with coach Lim to narrow down the aid plan.

In January, the South Sudanese Ministry of Culture, Youth and Sports appointed Lim as the head coach of the national football team, acknowledging his efforts to fight HIV/AIDS in South Africa in the past decade. The Sports Ministry added that it expects Lim’s passion for football will help South Sudanese players advance their abilities.

Meanwhile, Lee Sung-je will coach the A-match team of the South Sudanese national football team. He previously served as head coach of Afghanistan’s national under-17 football team for 10 years.

“From now on, KFA should be more actively engaged in promoting football in the world’s most impoverished regions. Reaching out to South Sudan will be our first step to carry out that mission.”

KFA’s aid parcels will be delivered sometime next month.