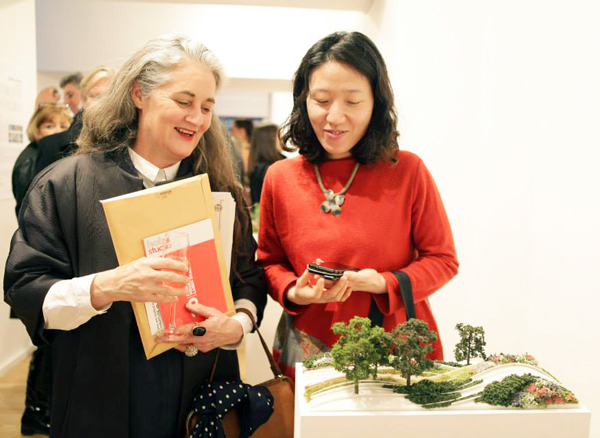 Visitors look at the 3-D-printed garden by Korean landscape designer Hwang Ji-hae at the Strand Gallery in London last week. Provided by the gallery

After the 3-D-printed garden show “miNaTURE” ended last week at the Strand Gallery in London, it was revealed that Korean landscape designer Hwang Ji-hae faced some pressures to change her exhibit - a Dokdo-themed garden - during the show.

Hwang’s miniature garden, “A Letter Posted One Million Years Ago: Dokdo,” featured an arrangement of the Dokdo islets’ indigenous wildflowers made on a 1:50 scale.

“On the day of opening, the officials recommended that I should change the title of my work to ‘Jeju Island’ because ‘Dokdo’ can be interpreted politically,” said the 38-year-old designer.

The request came after officials received an anonymous phone call that said “there is rising anti-Korean sentiment in Japanese society [over the disputed islets].”

Japan claims Dokdo is its territory and uses the name Takeshima. Hwang, however, refused to change the name.

Designed by Andrew Fisher Tomlin, the assessor and judge of the Royal Horticultural Society, the exhibition tried to encourage designers to come up with more innovative and experimental designs using 3-D printer technology.