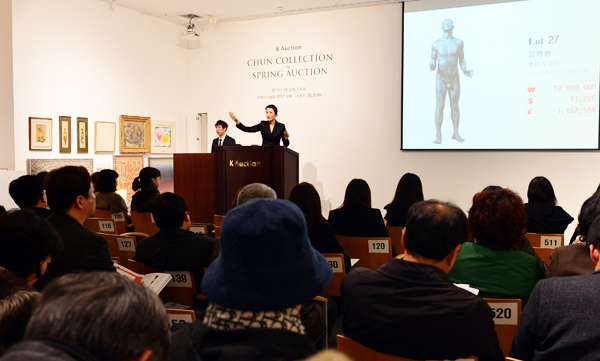 Auctioneer Son Yee-chun yesterday introduces to bidders a work by sculptor Kim Young-won that once belonged to the family of Chun Doo Hwan, Korea’s former president and strongman, at K Auction in southern Seoul. It was the final round of an auction to sell the private art collection confiscated by prosecutors from the Chun family to pay the former president’s outstanding 167.2 billion won ($149.5 million) fine for misdeeds while in office. In the final round, all the 97 pieces of art put up for auction were sold, with sales reaching 1.36 billion won. The Chun Collection at K Auction and Seoul Auction brought in 7.28 billion won, lower than the prosecutors’ estimates of 10 billion won. [NEWSIS]