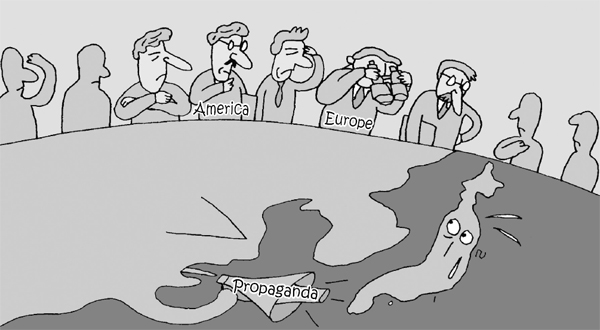 The Taiwanese Embassy in Seoul is diligent. They frequently send out promotional emails, and if they don’t have a special event, they write about Chinese cuisine, which provides unlimited options.

In contrast, the Chinese Embassy in Seoul does not communicate very often. But when they do, it is significant. Not so long ago, they sent out an email containing very important information.

The email said that the Standing Committee of the National People’s Congress designed Sept. 3 as Victory Day of the Chinese People’s War of Resistance Against Japanese Aggression, and Dec. 13 as National Memorial Day for victims of the Nanjing Massacre.

In addition to sending the Chinese documents, they also provided a translation in Korean. The translation suggested that the focus of China’s foreign policy this year would be on “anti-Japanese” measures.

In fact, the Chinese Embassy requested the JoongAng Ilbo print a contribution earlier this year. Its title was, “The one that commits injustice shall be nailed on the pillar of disgrace in history.”

Here, “the one that commits injustice” refers to Japan.

Last year, Chinese President Xi Jinping held a conference on the diplomatic work of neighboring countries. The meeting’s message can be summed up in four values: friendship, sincerity, benefit and inclusiveness. China will be friendly and sincere to neighboring nations, share the benefits of its development and embrace others. However, China’s recent diplomatic efforts suggest that those neighboring nations do not include Japan.

Naturally, the cause is the Shinzo Abe government’s extreme conservative swing and its denial of its nation’s history.

The battering of Japan by China began earlier this year with Chinese ambassadors in 32 countries condemning the country in unison. And this attitude has spread all over China.

In Songshan District, Yunnan Province, a movie about “comfort women” - the women and girls forcibly recruited into sexual slavery by the Japanese Imperial Army during World War II - is in production. Jilin Province Archives released documents detailing human experimentation carried out by Unit 731, and the Chinese Foreign Ministry invited members of the foreign press to tour the sites of the Nanjing Massacre.

In the past, the Chinese government had been prudent to criticize Japan. But in the Xi era, anti-Japanese sentiment is evident in the legislation. Beijing is determined to punish Tokyo’s rightist movement. Dec. 13 is designated as National Memorial Day for the victims of the Nanjing Massacre.

The day had been observed at the municipal level in Nanjing, but now it has been elevated to the national level. China wants to raise worldwide awareness of Japan’s atrocity by calling it a “Memorial Day,” a phrase widely used in the West. The international community mourns victims of the Holocaust during the International Holocaust Memorial Day on Jan. 27 and remembers the violence of the Nazis that killed six million Jews. Beijing also wants to remind the world of Japan’s brutality with an annual event mourning the 300,000 victims of the Nanjing Massacre.

More importantly, China has ratified Sept. 3 as Victory Day of the Chinese People’s War of Resistance Against Japanese Aggression.

The People’s Congress explained that the purpose of the designation is to encourage the Chinese people to pursue the dream of great revival.

Just as Deng Xiaoping said, the trend of the world is still “peace” and “growth.” Therefore, China will not pursue a physical clash with Japan. Instead, it is waging a media war against it, with a special focus on international public opinion. And Beijing is using Japan’s tendency to care about Western media.

This year, the first country that Xi visited was Russia, a move aimed at countering Prime Minister Abe’s attendance of the 2014 Sochi Winter Olympics. When he visits Germany later this month, he hopes to pay a special visit to the Holocaust Memorial in Berlin. Germany is reportedly recommending visiting another site because it doesn’t wish to get involved in China-Japan tensions. But regardless of the outcome, Xi’s foreign policy is clearly focused on going against Japan.

Xi is making a return visit to Korea, just as President Park Geun-hye went to China last year. He is likely to come in June or July, and the trip will focus on anti-Japanese policy. China has also established a memorial for Korea’s famed independence fighter Ahn Jung-geun in Harbin in response to a request by Park.

Also, the Liberation Army Headquarters in Chongqing is being restored. While Korea condemns Japan’s conservative swing, it is prudent to cooperate with China’s anti-Japanese moves. We need to carefully plan how to welcome Xi because China is living in an age of resistance against Japan under Xi’s leadership.