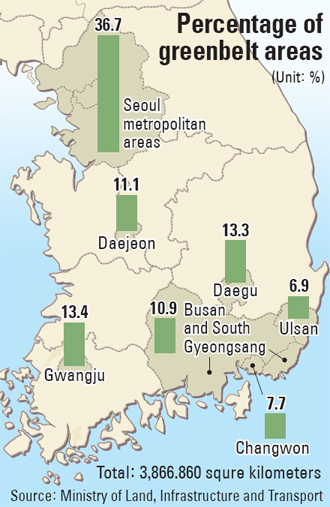 The government aims to encourage 14 trillion won ($13.05 billion) of investment in provincial areas to balance economic development across the nation, mainly through deregulation of greenbelts.

Heads of four economy-related ministries - the Ministry of Strategy and Finance, Ministry of Trade, Industry and Energy, Ministry of Land, Infrastructure and Transport and Ministry of Agriculture, Food and Rural Affairs - came up with a package of deregulation plans yesterday to encourage new investment in various parts of the country.

The biggest part of yesterday’s plan is to allow commercial and industrial facilities in areas that have recently been released from the government’s greenbelt regulations, which restricted any kind of development. The Land Ministry said those areas remain underdeveloped due to remaining rules and regulations. Until now, only residential development was allowed on former greenbelt areas.

Greenbelts were first introduced by the Park Chung Hee government in 1971. Although previous administrations have made attempts to lift the regulations since 2000, this is a more aggressive step.

In the next four years, the government will allow creation of shopping centers, cultural and leisure facilities, and offices and factories on a total of 12.4 square kilometers of land in 12 regions including Daejeon, Gwangju, Changwon and Busan. This will add 8.5 trillion won in investment, the government estimated.

About 1,600 construction sites that have been idled due to government regulations will be able to resume work.

Neighborhoods near Gimhae Airport in Busan will be the first to enjoy the changes. Residents of those areas don’t have enough commercial facilities, which is inconvenient and hinders growth of the real estate markets.

The government isn’t yet considering easing regulations on Seoul metropolitan areas, which account for 38 percent of the remaining greenbelt land.

The Finance Ministry found that mining and manufacturing production fell in South Jeolla and North Gyeongsang areas last year due to lingering regulations.

“Each region is a base for residents’ lives and balanced growth of each region is necessary for overall growth of the nation,” said President Park Geun-hye at the fifth trade and investment promotion meeting at the Blue House yesterday.

Another part of the regional economy development plan is to create 56 clusters formed voluntarily by large and small cities with the goal of improving regional industries or business projects.

“The key point of the latest plan is to change the previous top-down, or central government-led, development projects into a bottom-up model, in which local governments voluntarily propose projects that they want to raise as core businesses of their regions, while the central government will support their plans.”

The current government believes the “5+2 metropolitan economic bloc” led by the former Lee Myung-bak administration failed because it relied heavily on investments of large businesses or state-run projects, which limited its job creation and the participation of local businesses.

Rather than artificially dividing the nation into several blocs, the Park government will let each city and county voluntarily form clusters to boost regional industries.

Under the plan, more than two cities or counties can propose a cluster via bilateral agreement and submit business plans to their local governments.

Currently, the government has received a total of 2,146 business plans.

The central government will review submitted plans and provide support, including tax credits. It wants to create as many as 56 clusters and name them Happy Life Districts.

Of the 56, 20 will be established in current large cities. For example, a district should include large cities like Cheongju in North Chungcheong and five nearby counties. The main point of such clustering is ultimately to make bigger cities with populations moire than one million.

For 15 large cities, the government is currently discussing what their core businesses should be. The discussion will be concluded in July.

Currently, 11 cities have been given a strategic project that they need to focus on: Video for Busan, software convergence for Daegu, cultural content for Gwangju, eco-friendly fuel cells for Ulsan, biotechnology and health for Gangwon, an eco and peace park in Gyeonggi, IT convergence for North Gyeongsang, aerospace for South Gyeongsang, bio and agriculture for North Jeolla and marine tourism for South Jeolla.