Jobs for women and retirees rise in February

Jobs for women and retirees rise in February 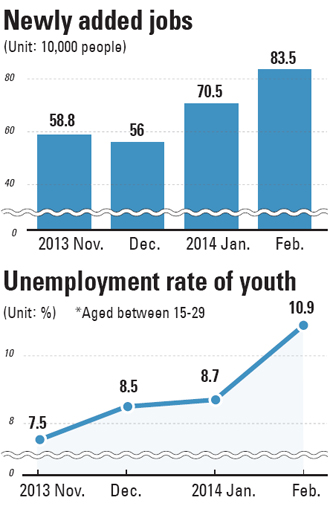 The improving job market is apparent proof of the effectiveness of the Park Geun-hye administration’s attempt to expand job opportunities, particularly for women and retirees.

According to Statistics Korea yesterday, the total number of people working in the country last month numbered 24.8 million.

The overall employment rate for Koreans between the ages of 15 and 64 added 0.1 percentage points from the previous month to reach 64.4 percent.

The Park administration’s three-year economic plan, announced at the end of February, targets an overall employment rate of 70 percent by 2017.

The last time the employment rolls saw so much growth was in March 2002 when 842,000 people joined the work force compared to a year earlier.

The Park administration has been urging the private sector to hire more women, especially those who took a break in their careers to get married or have children, and retired Koreans.

The nation’s largest conglomerate, Samsung Electronics, as well as leading retailers like Lotte and Homeplus, have been aggressively recruiting women and retirees by offering part-time jobs with flexible hours.

But young people aged between the ages of 15 and 29 are still struggling to find jobs. The unemployment rate for young people exceeded 10 percent in February. The last time it climbed above 10 percent was in January 2000, when it hit 11 percent. The statistics office blamed graduation season, when students fresh out of college struggle to find jobs.

“Last month showed that all sectors are seeing a mild recovery in hiring,” said an official at the statistics office. “The increase in the number of people getting jobs was sharp as the job market a year ago wasn’t very good.”