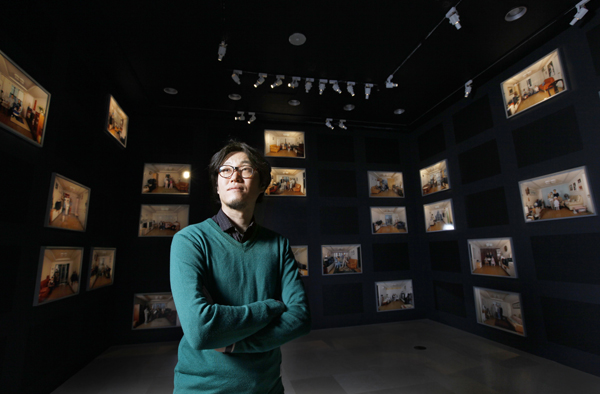 Artist Jung Yeondoo poses in a room with his “Evergreen Tower” series at the Plateau Gallery in Jung District, central Seoul. By Park Sang-moon

Media artist Jung Yeondoo has devoted his art to people.

Some think his work is too “optimistic,” and it’s not hard to see why.

In his collection from 2001, “Bewitched,” Jung depicted his models - everyday people from around the world - living out their dreams.

His undivided attention and engagement with all of his subjects has captivated fans time and time again since he made his mark on the scene by winning the artist of the year award at the National Museum of Modern and Contemporary Art in 2007. 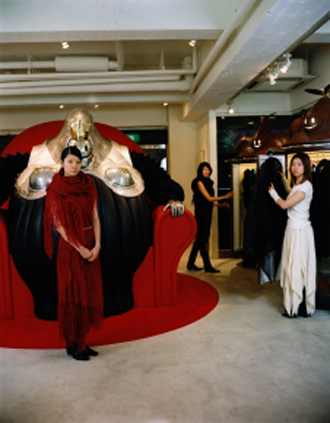 He has portrayed families, boutique clerks, residents of New York and everyone else in between, so it may not be all that surprising that his latest works in the “Spectacle in Perspective” collection includes a rehashing of Rodin’s “The Gates of Hell” with the use of a 3-D gaming device (Oculus Rift), as well as a close-up look at the middle-aged ajeossi (older male) fans of a B-grade girl group.

“Virgil’s Path” is based on a statue that is already a fixture at the Plateau Gallery in Jung District, central Seoul, which Jung uses to emphasize the point of “having to miss one thing to see another.” Meanwhile, the “Crayon Pop Special” is set to make viewers laugh as they feel the fandom of Crayon Pop through a media installation.

Before the exhibition’s opening, Jung talked about the collection that marks his interests at various intervals of his life.

Q. Tell us more about Siratori, the inspiration behind “Virgil’s Path.”

A. He’s a blind Japanese man who likes to take pictures and enjoys showing them to others. He’s a masseuse who works next door to the art gallery that I was visiting. When I met him at the gallery, he put his walking stick away, grabbed onto my sleeve and asked me to guide him through the exhibition. I had to explain the obvious, from the lighting and everything visible, how much space was used, and by explaining to him I really got an in-depth idea of the exhibition myself. I hear he’s been to the exhibition several times with different people.

It sounds like Siratori creates art for others’ sake in a way. When you create, is it for yourself or for others?

I’m not sure that you can make work just for yourself. Of course, at first you have to enjoy it to start it, but you can’t make others feel what you don’t feel yourself.

Contemporary art in some ways says “the more the better.” It’s deemed better to get your art out there to as many people as possible, rather than just for one person. I like the idea of making my art accessible to a lot of people, but sometimes I present my art in an inconvenient way, and even if the result is that only a few people get to enjoy it, I get a lot of satisfaction out of it.

What do you mean by “an inconvenient way”?

A slide projection that dissolves over 16 seconds, very slowly followed by another 16 seconds of a blank screen. Nine out of 10 will walk out, but one person will really get into it and watch it for half an hour.

In “Bewitched,” you helped actualize others’ dreams through art. What was that like?

In “Hero,” the predecessor to “Bewitched,” I saw the subject, a Chinese restaurant delivery boy, crash into a high schooler who was the same age. The boy he hit was bleeding while the delivery boy was still acting very macho, as if it wasn’t a big deal. 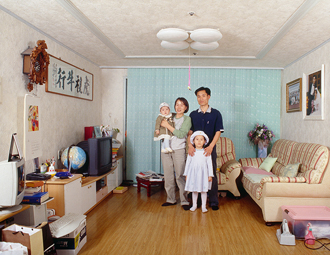 It was only when the paramedics came and touched his hand that he cried out in pain and you saw the child in him. His finger was broken.

While his reality was that he drove around Bundang delivering Chinese food, in his mind he was as far away as Hollywood.

What is in a dream that you are so fascinated by?

The thing about dreams is just like when you say to someone, “Let’s get coffee.” It’s not so much that the people want coffee, but it’s that they want to talk to someone. When you ask people about their dreams, you are delving deep into their mind, their thoughts and the part of themselves that isn’t so visible.

When you ask people about their dreams, did you get some strange looks?

Absolutely, people are taken aback. But when you explain to them that you are creating art, people can be very generous. They will say among themselves, “Oh, it’s art.” I don’t think there is a better way to communicate than with the pretext of art.

In the “Evergreen Tower” series, you went into an apartment complex. What was that like?

I just set up my camera in the living rooms and made a point not to interfere at all. The families worked to create the most ideal family portrait themselves. In that work, what was most important to me was how these families reacted to an artist coming into their homes in the name of art.

The outcome looks as if all the families assumed similar poses.

Not at all. There were some who got dressed to the nines and took out their musical instruments, while some didn’t want to participate at all and yelled at me. Although they thought I was taking a family portrait for them, I was actually taking a picture of their home. But each family prepared for it in their own unique way.

It’s been 10 years since that series. What do you think would happen if you did a follow-up project?

I’m not sure that I can do that. I think timing, energy and passion all comes into play when it comes to art.

[As for] myself from 10 years ago, I think I might have been less experienced, but I had a more vibrant energy. Secondly, I don’t believe that just because I did it once and I did it well that I’d be able to pull it off again. That energy is transient. It’s like that thought, “Can you try again with someone you’ve loved in the past?” 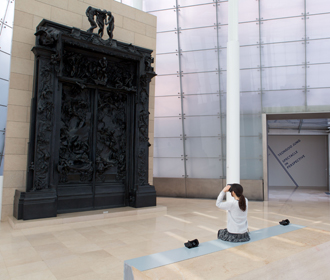 You have covered various classes of society. Do you have a favorite demographic?

Rather than seeing my subjects as belonging to a certain class, for me it’s a personal project where through one-on-one interaction, you get to draw out their thinking and philosophies. I think, personally, art is more of a personal account of feelings and thoughts than a social commentary.

Do you ever question the credibility of the subjects you place in front of your camera?

I don’t think in my work the question of whether the subjects are being genuine is that important; rather, it’s more about how much they are willing to share with me at that given time.

Your art seems to have a positive outlook on people and humanity.

Artist Jung Yeondoo’s latest work, “Crayon Pop Special,” consists of the installation of an empty stage for the girl group Crayon Pop, far left, and videos of performances by the popjeossi, the devoted fans of the girl group, who are mostly men in their 30s and 40s.Provided by the gallery

If that’s how people feel when they encounter my art, I’m grateful, but when I exhibited “Bewitched” at an underground venue, I kept a guest log. One person left a note that read, “Thank you for chronicling people’s dreams,” with hearts all over it.

Underneath that, someone else wrote, “I learned a clear lesson that dreams are only actualized through a reality that’s not mine.”

I was pleased with the responses as it showed that I had a balanced portrayal of life.

One of your new works is based on the fandom around Crayon Pop. Why this group over others?

Crayon Pop is special. Can you not feel it? When I first saw Crayon Pop, I thought they’d given up on a few things, like looking good, for example. I saw a video of them jumping up and down in sweats, it was great.

When I think of Crayon Pop, I think the group embodies the passion for success that is quintessentially Korean; but the likelihood of that is not that high. They come from a small agency, they are around 25, all short and in stark contrast to the girl groups of today, who all look like nymphs.

But maybe it’s their desire for perfection. From Internet TV broadcasts to guerilla gigs on the streets, their determination is astounding.

To an extent, they are ashamed at being such hardcore fans of a girl group and they try to compensate by being model citizens from lining up in an orderly manner and picking up garbage. It’s as if they’re saying, “I’m a perfectly normal guy, but I like this group so much, and not in a sick way.” In January, when I recruited the help of 50 popjeossi for a performance, only one person was late and that was due to a flight delay. They came from as far away as Busan, and from all across the country, really.

Is there an aspect that you just can’t relate to in regard to the popjeossi?

Previously, I photographed dancers and to photograph them well, I took dancing lessons and I learned that they moved to the beat and that I needed to capture them at those specific moments. If I had not known how to dance, I don’t think I could have taken those pictures. In the same regard, to relate to the popjeossi, I went around with them supporting the group. I own a sweatpants set. I am in a chat room with them on KakaoTalk and we still keep in contact.

So have you met Crayon Pop?/

After hanging out with the popjeossi, I’d get butterflies when I saw the girls and couldn’t muster up the courage to talk to them. I did talk to their agency on a few occasions, though.

*“Spectacle in Perspective” has about 50 works and runs through June 8.