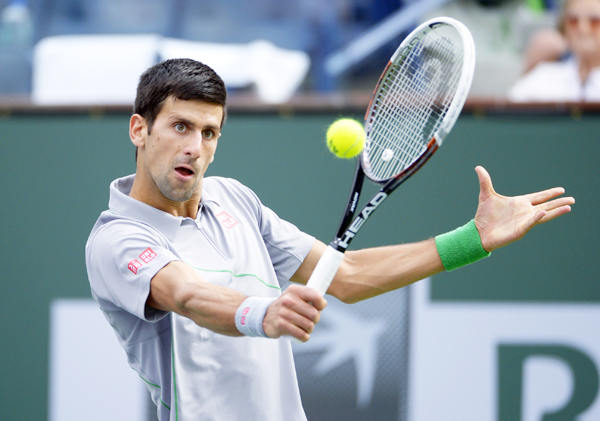 Novak Djokovic defeated Alejandro Gonzalez, 6-1, 3-6, 6-1 to end the Colombian’s surprising run to the third round at the BNP Paribas Open on Tuesday.

Djokovic, a two-time champion at Indian Wells, earned the only two breaks of the third set, including a seven-deuce game that he closed out with a clever backhand drop volley.

Gonzalez had never won an ATP Tour-level match in six tries before Indian Wells. He won third-set tiebreakers in his first two matches here before keeping the world’s second-ranked man on the court for just over 90 minutes.

“It took me a little bit to get used to it,” Djokovic said. “You’ve got new faces and new players who are able to challenge the top guys, and this is good for the sport. It also makes us work harder and improve trying to get our game to a high level because the guys are coming up.”

Djokovic had 28 winners to 11 for Gonzalez, who also had 23 unforced errors.

“I just had a big loss of concentration and allowed him to win the second set for no reason,” Djokovic said. “Bounced back better in the third, but I obviously cannot allow myself to have these particular concentration lapses in the match at this level.”

Jelena Jankovic routed Caroline Wozniacki, 6-3, 6-1 to reach the quarterfinals, winning a matchup of former tournament champions and No. 1-ranked players.

Jankovic next plays either second-seeded Agnieszka Radwanska or 22nd-seeded Alize Cornet, who met late in a fourth-round match.

Jankovic made the quarterfinals for the first time since winning the Indian Wells title in 2010, when she beat Wozniacki. The Dane won the title in 2011 and lost to Maria Sharapova in last year’s final.

But she offered little resistance against Jankovic, who raced to 5-0 in the second set before Wozniacki held at 40-love to avoid being shut out in front of her fiance, golfer Rory McIlroy.