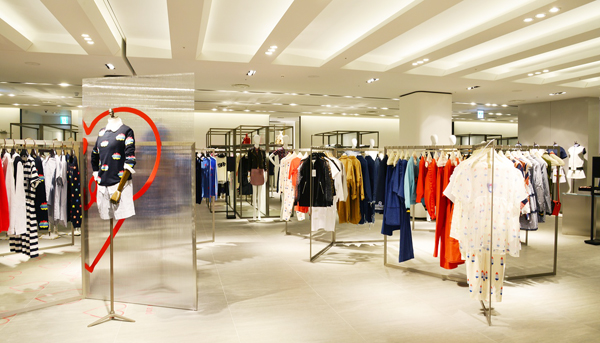 Floors two to five of the store’s west building - which specializes in contemporary apparel and lifestyle goods - had been closed for 63 days for renovations. The new area, according to Galleria, is going to be a “completely new trend.”

“The renewal of our luxury hall is the third leap for us,” said Park Se-hun, president and chief executive of Hanwha Galleria, the Hanwha Group affiliate that operates the store. “Going back in history, we opened the country’s first luxury hall in 1990 and throughout the years we made progress [by making new challenges]. The last was in 2004 when we renewed the exterior of our store with a facade [in collaboration with architect Ben van Berkel].”

At a pre-opening media event yesterday, Park explained that the new concept is to create an open space in which different brands are not separated by walls. The Galleria Department Store partnered with a Canadian design firm called Burdifilek for the renovation.

“Many department stores in Korea offer the same thing by renting out spaces to brands,” Park told reporters. “We, on the other hand, want to offer customers a concept, merchandising and service exclusive to Galleria.”

The reopening of Galleria’s Luxury West Hall comes at a time of heightened competition in the luxury retail industry. According to Chung Ho-jung, chief marketing officer at Hanwha Galleria, the idea to change the space arose when its employees and merchandisers realized that the unique shopping experience offered to customers throughout the years - focusing on premium service and not-so-common brands - is now offered by other retailers as well.

“The renovation wasn’t just about interiors,” Park said. “We upgraded and brought new changes in all areas, from merchandising to customer service.”

The reopened store has a concierge desk for foreign customers who wish to receive tax refund services and shopping information. It offers services in three different languages: English, Chinese and Japanese. There is also a separate Global VIP Lounge on the fifth floor.