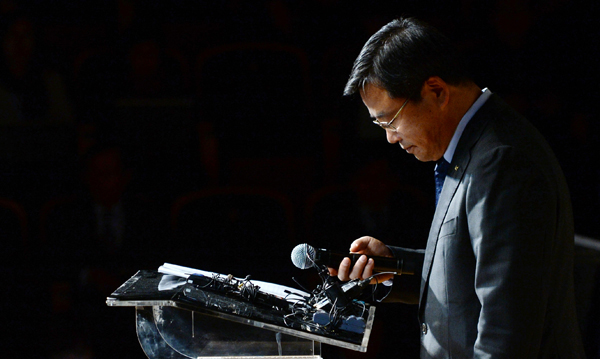 CEO Kang Seok of KT ENS announces that the company has filed for court receivership after failing to pay off corporate bonds after one of its employees committed massive loan fraud. Kang spoke yesterday at KT’s headquarters in central Seoul.[NEWS1]

KT ENS, a subsidiary of the nation’s leading mobile carrier that was involved in a massive loan swindle, has filed for court receivership yesterday after failing to pay back corporate bonds worth 49.1 billion won ($45.8 million).

“We failed to pay back commercial paper worth 49.1 billion won and are due to repay 150 billion won in debt by the end of this year, which would not be possible even with KT’s funding support,” said Kang Seok, CEO of KT ENS, at the press conference.

The matured commercial paper is related to project financing loans in Romania.

“We did not ask KT for funding support, but we did ask the company to find a new sponsor for project financing of the photovoltaic power generation business in Romania,” said Kang.

KT ENS specializes in the construction of solar power plants.

It is the first time KT’s subsidiary has applied for court receivership. The company found it difficult to obtain financing after one of its employees committed massive loan fraud.

Hana Bank, KB and Nonghyup, which are at the center of the loan fraud, were found to have issued loans that totaled more than 440 billion won, much more than the 70 billion won of accounts receivable that were used as collateral.

If KT ENS goes under court receivership, it is expected to be even more difficult for banks to recoup the loans issued to a paper company set up by the KT ENS employee and suppliers.

“If the loan swindle had not happened, we would not have had to file for court receivership, as it would have been possible to extend the corporate paper maturity 17 times. We also did not have any plans to give up the solar power plant business in Romania, as we expected to make profits from it after two to three years,” said the chief executive officer.

If the company’s court receivership is approved, bonds will be issued and a debt moratorium will begin.

In addition, a work-out program led by a legal administrator will proceed.

Meanwhile, the banks victimized by the swindle claim that KT ENS must take full responsibility and pay back the amount of loans, as it was the subsidiary’s employee who was involved in suppliers’ forging of accounts receivable.

KT ENS contends it had nothing to do with the incident and that the individual employee should be charged with the crime.