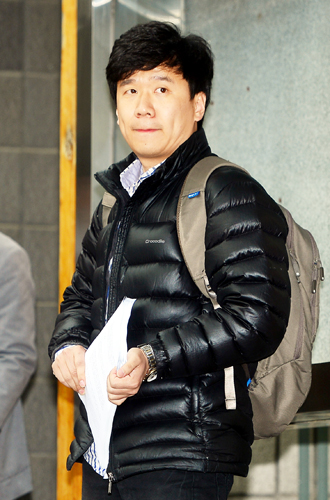 Yu Wu-seong enters the Seoul Central District Prosecutors’ Office yesterday to be questioned as a witness in an NIS evidence fabrication case. [NEWSIS]

A broker who allegedly provided a fabricated document to the National Intelligence Service was arrested by prosecutors and questioned yesterday after a failed attempt to commit suicide last week.

The broker, identified by the surname Kim, was secretly taken out of Yeouido St. Mary’s Hospital in Seoul by a group of prosecutors who showed up with an arrest warrant. Kim’s doctor said Kim has almost recovered from the March 5 attempt to slit his own throat.

Kim was taken from the hospital to the Seoul Central District Prosecutors’ Office for questioning.

Kim, a 61-year-old ethnic Korean who lived in China, wrote a suicide note saying he worked for the NIS as an outsourced broker and provided the spy agency with a document regarding the immigration records of an alleged North Korean defector named Yu Wu-Seong, who was tried and acquitted of espionage for Pyongyang.

The document turned out to be fabricated.

In his suicide note, Kim argued the NIS should pay him 10 million won ($9,330) for the documents. He added that he was sure that Yu was a North Korean spy.

Hours after the arrest of Kim, the prosecution also called Yu in for questioning. At around 1:40 p.m., Yu appeared at the prosecutors’ office, surrounded by reporters.

“I’m not a spy but an ordinary man,” Yu told reporters. “I just came to the Republic of Korea to seek freedom and democracy.”

Yu left the prosecutors’ office about 80 minutes later. Prosecutors planned to hold a face-to-face cross-questioning with Yu and Kim at the same time, but Yu refused to answer most questions and left early.

In August 2013, the 34-year-old defector was acquitted of charges of spying for North Korea. At the time, prosecutors charged that Yu, who worked as a civil servant in the Seoul city government, provided personal information about 200 other defectors living in the capital to the North Korean regime.

Yu admitted to taking the first trip, saying he attended the funeral of his mother. However, he denied the second trip.

After Yu was acquitted, the prosecution appealed the verdict and submitted to the court three documents provided by the National Intelligence Service seeking to prove Yu’s visit to the Communist state.

Broker Kim is known to have provided the NIS with one of three documents. The prosecution has been looking into whether Kim was involved in the actual forgery, as well as whether the NIS was aware of the falsification.

Yu’s attorneys told reporters yesterday that the prosecution and the NIS not only fabricated evidence but also tortured Yu’s younger sister.

In October 2012, Yu successfully brought his younger sister from China to South Korea by airplane. However, during questioning by the NIS, a mandatory step for all North Korean defectors, the sister said her brother was a North Korean spy.

After her brother was indicted, she took back that statement. At his first trial in August 2013, she said she was forced to make a false statement against her brother after being tortured by NIS agents. But the prosecution maintained that Yu’s attorneys persuaded the sister to reverse her testimony on behalf of her brother.

After the prosecution lost the first trial, largely because of the sister, they filed an appeal and submitted three pieces of evidence last November: the entry and exit records of Yu between North Korea and China and two confirmation letters from the Helong police station in China and the Sanhe immigration office.

However, on Feb. 13, the Chinese Embassy in Seoul sent an official letter to Yu’s attorneys saying that all three of the documents were fabricated. The embassy confirmed the evidence submitted by Yu’s attorneys, which only proved the first trip of Yu, as original and official documents issued by the Chinese government.

While the spy agency is under fire for fudging evidence, questions were also rising about Yu’s identity.

In fact, Yu lied to the spy agency when he came to South Korea. He was a Korean-Chinese living in North Korea, but he didn’t have North Korean citizenship. Officially, he is a Chinese national, so he was able to travel freely between China and North Korea. He is not an actual defector.

Yu admitted he lied but said he wanted to settle in South Korea as a defector, a status that gives him monthly government subsidies and residence. To disguise himself as a defector, he forged a North Korean ID card.

Meanwhile, sources tipped off the JoongAng Ilbo that Yu’s sister frequently changed her testimony during six months of questioning by the NIS after arriving in South Korea.

According to the sources, the sister said on Nov. 21, 2012, “My brother is a spy who belongs to the State Security Department (equivalent to the NIS in South Korea).”

On Dec. 6, she reversed her testimony, saying, “I lied because they [NIS agents] told me I would be wealthy in South Korea [if I accused my brother].”

The NIS sent all of the testimony of the sister to the prosecution as evidence. The prosecution pushed forward with Yu’s trial, disregarding the conflicting testimonies.

“We were sure about Yu’s alleged second trip to North Korea, which his sister also confirmed,” a prosecution official working on the case, told the JoongAng Ilbo. “So we thought her testimony was reliable.”

However, Yu told reporters recently, “My sister was forced to tell a lie because she was threatened to be returned to China. ”

“The NIS wanted to a big achievement with this case,” an attorney who was a former prosecutor said. “But the bigger problem was that the prosecution moved forward to indict Yu while his sister’s testimony went both ways.”