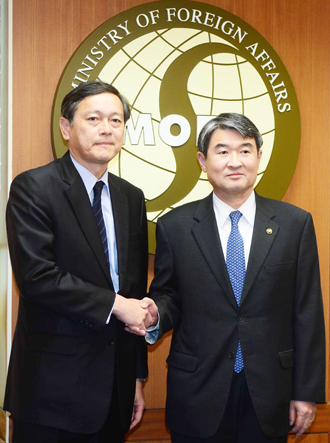 Tokyo once again proposed summit talks between the leaders of Korea and Japan during vice-ministerial level talks in Seoul yesterday, in an attempt to thaw the yearlong diplomatic deep freeze between the two countries.

The proposal was made by Japanese Vice Foreign Minister Akitaka Saiki and his Korean counterpart, Cho Tae-yong, during a meeting at the Ministry of Foreign Affairs in central Seoul yesterday.

If the talks come about, they would be the first held between Prime Minister Shinzo Abe and President Park Geun-hye since the two leaders took office in late 2012 and February 2013, respectively.

Tokyo has requested a summit several times, but Seoul has refused due to strained relations over the Abe administration’s intransigence about historical and territorial disputes.

Park and Abe both attended an economic forum in Davos in January but did not hold separate talks. Their foreign ministers have not had formal talks.

Before yesterday, the last meeting between first vice foreign ministers of the two countries was eight months ago.

Yesterday’s talks were held at the request of Japan and were the first high-level talks between the neighbors since Abe’s controversial December pilgrimage to the Yasukuni Shrine in Tokyo, which enshrines war dead including Class-A World War II war criminals. Seoul and the international community strongly condemned the visit.

Seoul, however, is reluctant to accept the proposal.

“We are not opposed to a summit but, rather, as our president said, a correct perception of history is the foundation of relations between the two countries,” Vice Minister Cho said yesterday while heading into the talks.

A Korea-Japan summit can come about when “such understanding is established and there is belief that fruitful talks can happen,” he said.

Ahead of yesterday’s talks, Japanese media reported that Saiki, who arrived in Seoul yesterday for a two-day visit, planned to propose a trilateral summit of the leaders of Korea, Japan and the U.S. on the sidelines of the Nuclear Security Summit in The Hague from March 24 to 25, which the three country’s leaders are scheduled to attend.

In April, President Barack Obama will also be meeting Abe and Park on separate trips to Tokyo and Seoul.

Seoul has criticized Tokyo’s fork-tongued method of proposing talks while taking an increasingly provocative attitude toward extremely sensitive bilateral issues, such as visits to the Yasukuni Shrine and apologies and compensation for Korean women forced into sexual slavery by Japan during World War II.

The Abe administration recently declared that it will “re-examine” the testimonies of Korean victims of sexual slavery that led to the 1993 Kono Statement, which apologized for the Japanese military’s forced recruitment of sex slaves.

But on Monday, Yoshihide Suga, Japan’s chief cabinet secretary, emphasized that the Abe government will not retract the Kono Statement, although it still plans on setting up a panel to investigate the testimonies, presumably to challenge them.

Criticism of Japan’s historical perspective by foreign media along with pressure from Washington and even the U.S. Embassy in Tokyo seems to forcing Tokyo to be more sensitive to its neighbors.

Washington has stressed the importance of strategic cooperation between the United States, Japan and South Korea to enhance security order in Northeast Asia.

Abe has visited the leaders of all 10 Southeast Asian nations but has yet to hold a summit with Park or Chinese President Xi Jinping.