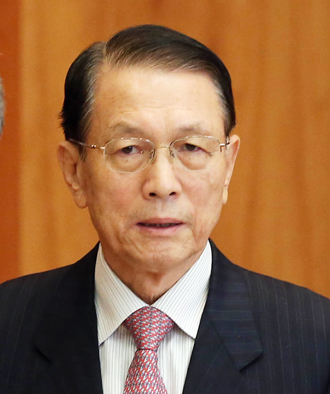 Presidential Chief of Staff Kim Ki-choon has been holding a series of lunch meetings recently with ruling Saenuri lawmakers, fanning speculation that the reclusive top aide of President Park Geun-hye is determined to demonstrate that he is in good condition, both in health and power.

Yesterday, the 76-year-old former justice minister and prosecutor general dined near the Blue House in central Seoul with Saenuri lawmakers on the Security and Public Administration Committee and the National Assembly’s Agriculture, Food and Rural Affairs Committee.

A day earlier, he had lunch with another group of ruling party legislators, members of the National Assembly’s Science, ICT and Future Planning Committee and the Environment and Labor Committee. He also ate with Saenuri lawmakers on the Strategy and Finance Committee and Health and Welfare Committee on March 7.

A lawmaker who attended one of those meetings said Kim asked the lawmakers to help him out, promising he would support them, too. “I will exert more efforts to communicate better,” the chief of staff was quoted as saying by the lawmaker.

The commonality among the conservative politicians who dined with the nation’s second-most powerful man is that they’re all in their first term.

Rumors surrounding Kim, who is known for refraining from public appearances, have surfaced in recent months. Some said the presidential chief of staff was on the verge of stepping down, while others believed he was ill. “I hear rumors about me, and research by the Blue House shows that the origin was Yeouido [where the National Assembly is located],” he was quoted as saying by another lawmaker who was at lunch on Tuesday.

“Given President Park’s unfaltering confidence in Kim and Kim’s highly motivated moves, it appears the rumors about him are groundless,” said a source with the ruling party.

Min Kyung-wook, a Blue House spokesman, responded to queries yesterday in a briefing, stating that the meetings were at the request of the first-term lawmakers.

“When asked why he held the meetings, Kim replied, ‘Is there a reason why I am not supposed to be having a meal with lawmakers?’ He said there were no intentions beyond communication and building friendship,” Min added.