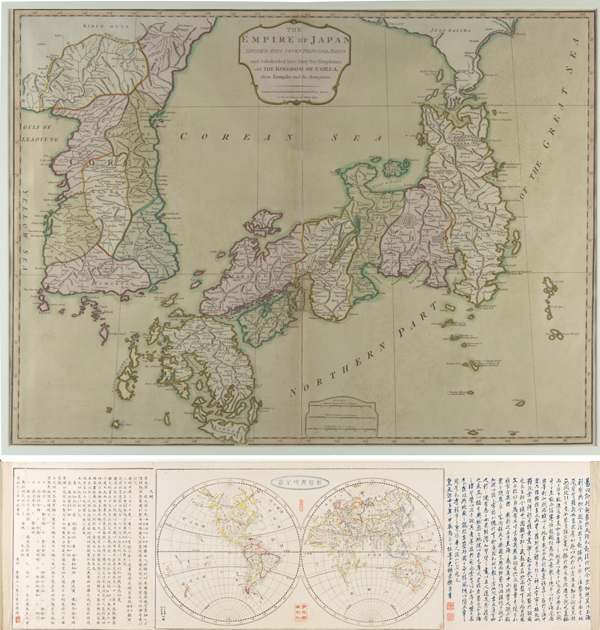 Top: A map made by officials from the United Kingdom, France, Germany and Portugal in 1794 marks Korea’s East Sea as “Corean Sea.” Above: A map made in 1844 by Shogo Mitsukuri, a Japanese official, calls the East Sea “Sea of Joseon.” Provided by Seoul Arts Center

“East Sea” or “Sea of Japan”? With lawmakers in the U.S. state of Virginia recently voting to add “East Sea” to its school textbooks, it looks like Korea has gotten the momentum in a campaign to change how the world talks about the waters between itself and Japan.

Now arts experts in Korea are gearing up to show how historical artifacts back up Korea’s position. Seoul Arts Center, in cooperation with Kyung Hee University Hye-Jung Museum, is presenting an exhibition of old maps that used East Sea to designate the disputed waters.

Titled “East Sea, Proven Through the Old Maps of the World,” the exhibition has 70 maps on display, a mix made by Koreans and foreigners, both from the 18th and 19th centuries.

“Studying old maps is the perfect navigator for anyone looking to trace back history,” said director Lee Dong-kook of the Seoul Arts Center’s calligraphy museum, which is organizing the exhibit. “It’s a good way to spread the word about ‘East Sea’ to other countries, as maps provide the shape of the world.”

Even maps made in Japan have used “East Sea,” which has led to Hye-Jung Museum claiming that Japan only won foreign recognition for the name “Sea of Japan” during its era of imperialism in the early 1900s.

“Even the people of Japan, which now claims the waters are named after its country, earlier acknowledged that it was right to have Korea’s name for the waters east of Korea,” said Kim Hye-jung, director of Kyung Hee University’s Hye-Jung Museum, who has collected these maps over 20 years. “Maps are not to be just seen, but to be read. From this exhibit, we can learn that history can be differently understood based on how you interpret [maps].”

The museum plans to move the exhibition to North Gyeongsang later and then overseas, including to Japan and the United States.

“I believe that showing this exhibition to more people outside of Korea is the best way to have them recognize what territory is ours,” said Kim, adding that such maps can also contribute in ensuring Korea’s rights over the Dokdo islets, which are disputed by Japan.

For anyone who wants to learn more about Kim’s expertise on the East Sea controversy, she and other officials will be lecturing in the Seoul Arts Center’s Opera Theater conference hall on March 28 and April 2 (Korean only).