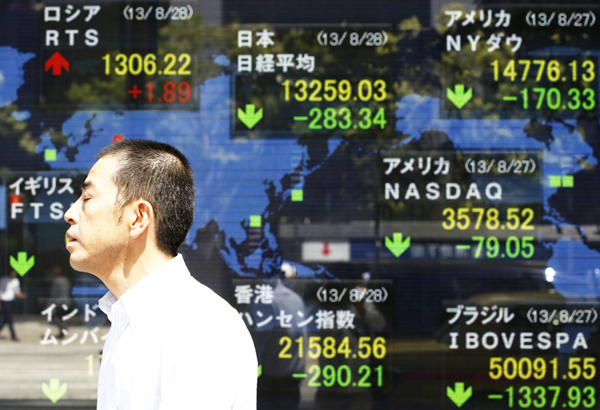 A pedestrian walks past a stock quotation board displaying various countries’ stock price indices outside a brokerage in Tokyo. Japan lost much of the early steam and drive from all-out fiscal and monetary stimuli mix called Abenomics. [REUTERS/NEWS1]

The world economy shows signs of unsteadiness again. On the high-income economic front - apart from Germany and a few other countries - the euro zone is mired in a stubborn slowdown. Japan has lost much of the early steam from the all-out fiscal and monetary stimuli mix called Abenomics. The strengthening of the U.S. economy has also sputtered. According to gross domestic product data released by the U.S. Commerce Department, the U.S. economy slowed last year, reporting a full-year growth rate of 1.9 percent (1 percent in per capita terms), slowing from 2.8 percent (1.9 percent in per capita terms) in 2012. If a rebound is further delayed, developed economies will likely join Japan in a lost decade or decades of growth.

Recovery has been unprecedentedly slow for developed economies after the financial sector imploded in 2008. Among 34 member countries of the Organization for Economic Cooperation and Development, 22 have not seen per capita income restored to pre-2007 levels as of 2012. The 2013 data is not final. But as of the third quarter of last year, 19 of 34 developed economies had yet to restore personal incomes to pre-crisis levels.

The U.S. finally restored per capita income to 2007 levels by the end of 2013. Even if growth picks up speed and expands at an annual rate of 3.5 percent (2.6 percent in per capita terms) for the next four years, U.S. per capita income will grow around 10 percent from 2007 to 2017. Even under this optimistic scenario, U.S. recovery would just about match Japan’s per capita growth of 10 percent during its lost decade in the 1990s.

How about the emerging economies? Many have pinned their hopes on the so-called BRICS countries - referring to China, Russia, India, Brazil and South Africa - to lead the global economy with their galloping paces. But so far, their performances have fallen below expectations.

First of all, the BRICS’ share of the world economy remains relatively small. As of 2011, China accounted for only 9.4 percent of total world output, followed by Brazil with 3.3 percent, India with 2.7 percent, Russia with 2.4 percent and South Africa with 0.5 percent, amounting to 18.4 percent in total. Even with double-digit growth, they cannot really drive the global economy.

Second, apart from China and India, the other economies are not moving at an exceptional pace. From 2000 to 2010, China grew at an average rate of 10.8 percent and India 8 percent. But Russia expanded by 5.4 percent, South Africa by 3.9 percent and Brazil by 3.7 percent. They performed better than the advanced economies, but nevertheless have not been stunning.

Moreover, it is questionable whether these economies can keep up the economic growth they experienced over the last 10 to 20 years. Brazil, Russia and South Africa have slowed sharply over the last one or two years. Because they mostly rely on exports of coal, grain and basic materials, their growth inevitably was hurt by a slowdown in their biggest importer, China. Social unrest stemming from inequalities also weighs down these countries. Brazil has been stricken with protests against social inequalities since last year.

The long-term outlook for India, which once was a rising star in the emerging bloc, is not so good. It lacks investment in social infrastructure and human resources as underscored by its 37 percent illiteracy rate. Discontent over the caste system and social conflicts over ever-worsening wealth polarization have also reached a serious level. Guerilla groups called the Naxalites devoted to Maoism still make terrorist strikes in certain regions.

China’s staggering growth has bred credit and real estate bubbles. It has grown to be as unequal and unbalanced as Latin American societies from a state of absolute social equality three decades ago. China is experiencing protests and even insurgencies. If its economy slows down further, simmering resentments could explode and spill over to damage the economy.

Korea is still heavily reliant on the external economy. Foggy prospects could influence its growth. We must strengthen our small and midsize corporate sector, stabilize employment and increase welfare expenditures to bolster domestic demand in order to re-engineer our economy to run on a domestic engine to weather external weaknesses. That’s the only way to keep our economy less reliant on outside fluctuations.

*The author is a professor of economics at the University of Cambridge.