Investing for the next shock

Investing for the next shock 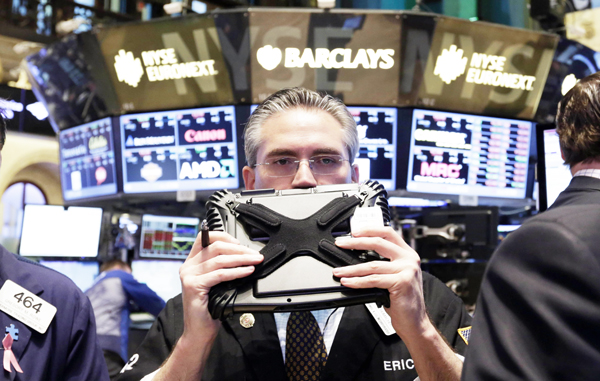 Traders in the New York Stock Exchange dumped stocks, bonds and commodities, prompted by signs of distress in China’s economy and worries about the end of the Federal Reserve bank’s easy money policies last year. [AP/NEWSIS]

U.S. stocks may be headed for a blow-off as individual investors pile into the market after last year’s meteoric increase. Peaks often are reached when everyone has been sucked in. Then, a major shock could force investors to focus on the slow global economy. With U.S. growth of only about 2 percent, it won’t take much of a jolt to precipitate another recession, which is long overdue by historical standards.

The investment climate would then shift from “risk on” to “risk off.”

The crisis in Ukraine, with the threat of Russian intervention and its destabilizing ramifications, is one possible shock. Not coincidental to its position in the tug-of-war between Europe and Russian President Vladimir Putin, Ukraine is home to a critical pipeline that ferries Russian natural gas to Europe.

Another possible jolt is a blowup in the Middle East that would cause petroleum prices to spike. Unlike natural gas, the price of oil is determined globally, and a significant climb would amount to a big tax increase on already stressed consumers.

Investors should also keep a watch on emerging markets, where the threat of contagion is real, as was demonstrated in January with a worldwide flight from risk because of financial, currency and political uncertainty in Ukraine, Turkey, South Africa, India and Argentina.

A financial crisis in China could be another reason for the market to change direction. Even after the recent surge in local government debt, China’s total government debt is a modest 53 percent of gross domestic product. Still, the central bank’s efforts to contain the explosive growth of the shadow-banking system may not work. The leap in short-term rates to 30 percent in June could be a warning sign.

A cautionary tale emerges from the recently released transcripts of Federal Reserve policy meetings at the height of the 2008 financial crisis. They show that, like China today, the Fed had all the money it needed to bail out any financial institution, yet central bankers admitted they were “behind the curve” and failed to move swiftly before runs on banks, notably Bear Stearns and Lehman Brothers Holdings.

Could China be facing a similar situation - plenty of bailout ammunition, ample willingness to use it, but tardy in its decision to step in? A financial crisis in the world’s second-largest economy would have global consequences.

The increase in protectionism, perhaps in the form of competitive devaluations, is also a worry. Japan has already embarked on this course and, as discussed previously, South Korea could retaliate as the two nations compete to sell autos, consumer electronics and other products amid sluggish global demand.

A major shock would increase the appeal of familiar “risk-off” investments. Investors would rush to Treasury bonds, high-quality corporate debt and the dollar as havens while dumping stocks and commodities. Some niche investments - such as small luxury goods and medical office buildings - also would look good.

There is a long list of unattractive investment areas in a “risk-off” environment that includes developed- as well as emerging-market stocks and bonds. A U.S. recession would halt the housing recovery, which is already on shaky ground, as pending sales, housing starts and mortgage applications for refinancing decline. And a housing slump would spread to many other sectors, including home furnishings and autos.

The retrenchment by consumers - which is already evident in the weak retail sales data of recent months and the lackluster holiday shopping season - would accelerate, hurting appliance and automakers, the airline industry and other consumer discretionary spending products. Consumer lenders also would be hit as borrowers withdrew or repaid debts and delinquencies increased.

The rally in junk bonds would probably be reversed if defaults surged. In addition, big banks, now deprived of profitable activities such as derivative origination and trading of off-balance-sheet vehicles and mortgage refinancings, could experience a jump in bad loans. Makers of old technology equipment would see their orders fall if capacity utilization - and with it capital spending - eroded. And if the global economy weakened, the downward trend in commodity prices would intensify.

*The author is a Bloomberg View columnist and president of A. Gary Shilling & Co. He is the author of “The Age of Deleveraging: Investment Strategies for a Decade of Slow Growth and Deflation.”