Budget airline pioneer for Asia, Tony Fernandes, does it his way

Budget airline pioneer for Asia, Tony Fernandes, does it his way 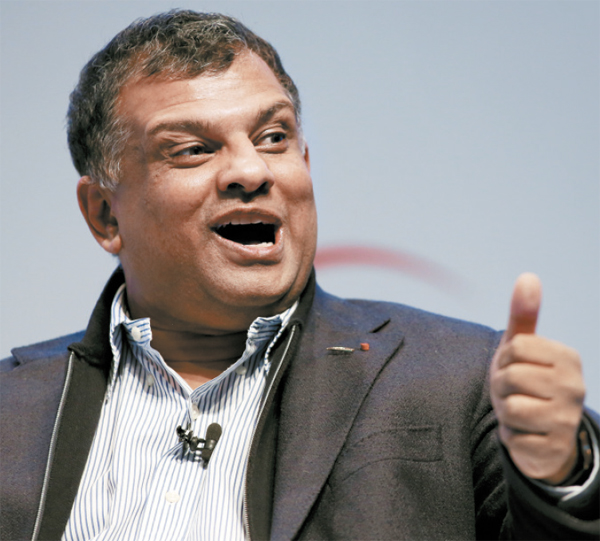 Tony Fernandes, 50, is an iconic Asian entrepreneur. He is the founder and CEO of AirAsia, the first and largest budget airline in Asia. He is the owner of a Formula One auto racing team and an English professional football club, Queens Park Rangers, which Park Ji-sung used to play for. Some may assume he has a rich family background or is the son of a big businessman in Malaysia, his homeland, but actually he is a self-made man.

Fernandes worked for the Warner Music Group for 14 years. But when Time Warner, parent of Warner Music, merged with AOL, he exercised his stock options and founded AirAsia in December 2001. Given that the aviation industry was strictly regulated in Asia and that everything had to be approved by governments, establishing AirAsia was tough from the start.

Without any experience in the industry, Fernandes dared to take over a public airline company, which had $11 million in debt and two airplanes. Although everyone around him said it was too risky, he made a profit in his first year of operation.

Since its establishment, AirAsia has flown 190 million passengers and now owns 142 aircraft. It operates flights on 150 routes to 85 cities in 20 countries. Forbes named Fernandes its 2010 Businessman of the Year.

Now, Fernandes is facing a new challenge in a totally new field: founding a branch of Britain’s Epsom College - his own alma mater - in Kuala Lumpur. Fernandes shared his thoughts on this in a recent interview with the JoongAng Ilbo.

“I went to Epsom because that’s where my parents decided to send me,” he said. “They were very concerned that I receive the best education possible, much like most Asian parents are.”

He confessed that studying at Epsom influenced his life a lot. One of the reasons he established a budget airline company was because of his experience as an international student, when he couldn’t return to Malaysia often due to the high cost of flying. Founding Epsom in Malaysia was also an attempt to offer the kind of high-quality education he experienced in the United Kingdom in his home country.

“The Malaysian education system has regressed from 40 years ago,” Fernandes said. “The government is quite aware of the problem, which is why they have drawn up a new education blueprint.”

According to data from Malaysia’s Performance Management and Delivery Unit, the number of Malaysians attending international schools is expected to increase to 70,000 by 2020.

“You get a full U.K. education on your doorstep for about two-thirds the price you would have to pay if you sent your children to the U.K.,” Fernandes said.

The school is also hoping to attract students from neighboring countries.

“Being closer to home also means weekly boarders get to go home over the weekends to spend time with their family,” he said. “And with the campus so close to the international airport, home is just a short flight away.”

With his own personal credo - “Believe the unbelievable, dream the impossible, and never take no for an answer” - Fernandes has become the 28th-richest man in Malaysia.

His total assets reached $650 million in 2014, according to Forbes Magazine.